Last night as we sailed north along the coast at a speed only slightly faster than a snail crawl there was fog. And more fog. So much fog that visibility didn’t extend from my balcony down to the Promenade Deck, much less down to the sea.  It was also a night punctuated on a regular basis by the ship’s horn. Not a small quiet sound but a rather deep, loud, startling blast. 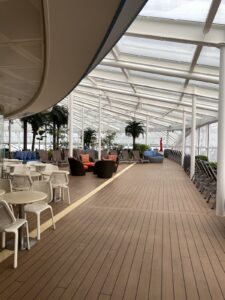 Enclosed, solarium, complete with pools of a sort

as well as some fairly comfortable seating. I left about 1000 when the numbers of people also choosing to hang out was increasing. It is a bit chilly out on deck. You would think that these people would have brought something more than t-shirts and shorts.

I had lunch at the Coastal Kitchen. Apparently Royal is rationing the number times that us lowly Pinnacles are allowed to eat there. So it is by invitation. That invite netted me a lovely beet salad with avocado followed by salmon with quinoa.

I had enough for lunch that I am mostly skipping supper. 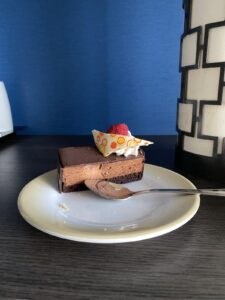 I otherwise spent a quiet day stitching – finishing up one Stitch-a-long that has been hanging partly done for a while. Now I can move on to yet another project which I will hopefully finish by the time we dock on Wednesday 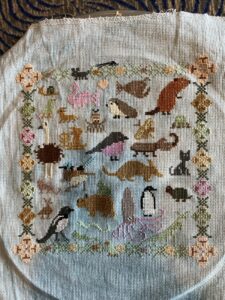