These sea days have proved extremely lazy for most. There were only a couple of us up for sunrise 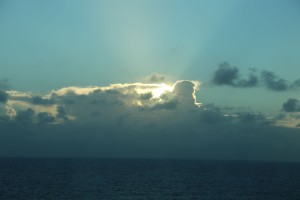 which could also have something to do with the fact that we are traveling west; losing an hour if not every day, then every other.

NCL advertises this set up as the largest rope course at sea. Similar to the Sydney Bridge, carrying along things that might drop on the unsuspecting heads of those walking below is not permitted. High on that list are cell phones, cameras and anything else that would smash or otherwise make an exceedingly loud crunch. Instead you get photos shot from various angles shot from below.

In actuality, it is cables, planks and a few ropes here and there. There is a lower level which is restricted to those 48″ and shorter. For the rest of us, we head – after being “helped” into safety harnesses and being cable locked into the overhead suspension system – up to the second and third levels with a number zip-lines, planks, obstacles to surmount between one end and the other.

I spent a happy couple of hours suspending and flying over the course secure in my knowledge that if clumsy caught up the worst that would happen was embarrassment while I dangled from safety harness & cable. Considering the drop would only be 20-30 cm it would not be dangerous but I managed to avoid it all the same.

By the end of the day I had sore arms, a great time and was packed. 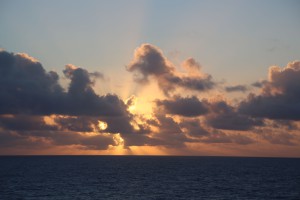 fiber person - knitter, spinner, weaver who spent 33 years being a military officer to fund the above. And home. And family. Sewing and quilting projects are also in the stash. After living again in Heidelberg after retiring (finally) from the U.S. Army May 2011, we moved to the US ~ Dec 2015. Something about being over 65 and access to health care. It also might have had to do with finding a buyer for our house. Allegedly this will provide me a home base in the same country as our four adult children, all of whom I adore, so that I can drive them totally insane. Considerations of time to knit down the stash…(right, and if you believe that…) and spin and .... There is now actually enough time to do a bit of consulting, editing. Even more amazing - we have only one household again. As long as everyone understands that I still, 40 years into our marriage, don't do kitchens or bathrooms. For that matter, not being a golden retriever, I don't do slippers or newspapers either. I don’t miss either the military or full-time clinical practice. Limiting my public health/travel med/consulting and lecturing to “when I feel like it” has let me happily spend my pension cruising, stash enhancing (oops), arguing with the DH about where we are going to travel next and book buying. Life is good!
View all posts by Holly →
This entry was posted in Cruising. Bookmark the permalink.