Last fall, when I was on the Spendlour of the Seas I knit a lot of hats. Gave almost all of them away.

When I was packing for this trip, I found one that had survived the last year unfinished and tossed it in my suitcase. Since today was a sea day on which I signed up for a number of on ship tours (Galley – gave up – too many people for just one group), Theater (still too many people but at least walked through the costume shop and back stage) and the bridge (really windy on the side bridges) I could fill up my time by either editing a number of documents or finishing the hat in order to say that I had accomplished at least one project on this cruise.

The hat won.  knit on 2.25 mm circ needle of zauberball. The band is faced with a picot turning row Immediately after completing the band I increased the number of stitches to 150% of the original then knit 10 cm straight. When I took it out, I realized that the decreases for the crown had been started. And me without my double points.  Magic loop, here I come… 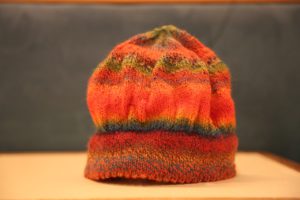 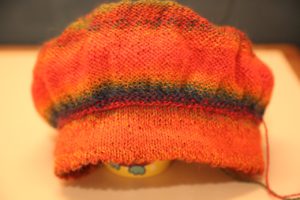 and the inside, the provisional cast on knit together with the live stitches

now if I could just find my yarn needle….