Or maybe it was NoCal? (5 Nov update – it was actually NorCal – title above edited to reflect correction provided by George)

Anyway, it was a benefit for the Cal Marching Band held last night at the University Club at the top level of the new  stadium.

There is a great view of the field – 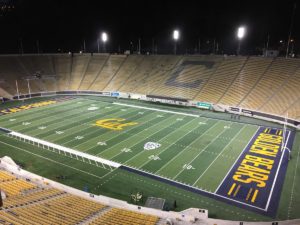 good view of the field but not exactly a close up

from the outside seating area on the visitors end

we had a great view of the sunset and San Francisco. 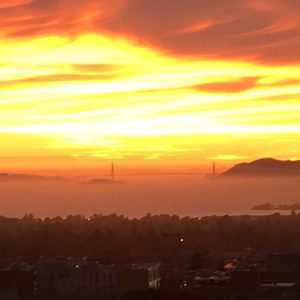 and the view toward the Golden Gate

and me without my decent camera. George thought I left it at home deliberately. All I can say is that I forgot it.. iPhone will have to do.

Anyway, the evening was to benefit the Marching Band. Yes, I know I said that before. Many of those present fell into the category of parent or band alumni along with partners. I think that George and I were the rare folks who, other than enjoying the band, have no real relationship to anyone in the band.

I had lovely conversations with former band members, parents of current band members and several band members as well. We didn’t buy raffle tickets and skipped the silent auction on some limited edition Grateful Dead Stuff. Sorry, but I am just not a Deadhead. Let someone else who really wants it, get it. I don’t have a qualm about just donating the money to them straight up.

What I didn’t mention was the need for ear plugs. We had two sessions from the Marching Band. As much as I enjoy them, the space is not conducive to large numbers of brass instruments. But the kids looked like they were having a great time and their reward was a most excellent flourless chocolate cake.

Today was a quiet day. I finished up a paper due on Tuesday and uploaded it before I changed my mind. Played a number of computer games, read a book, studied some more, did research on the National Guard (YES! I was right about Title 32 for operations out of home state) and otherwise tried to be sensible.

Yes, I know. Me sensible? It might just apply.