That seems to be the current question. We had a break for a while from the downpour which turned out to be rather critical. Since rain, much less flooding is rare here, it is not uncommon for storm drains to be clogged. That is, when there are storm drains at all. There are still a number of roads and underpasses that are closed due to deep standing water. And, like those who believe in their GPS rather than their eyes, there are those which have attempted those “puddles” anyway only to stall out which can cost significantly.

(for those of you in cold weather and snow country,  the concept of four wheel drive does not equal four wheel stop is obvious. Here – owning an SUV doesn’t mean that you have a clue or any significant driving ability. Enough said).

My day was simple – Dropped Dani at work with a stop at Peet’s on the way for a pumpkin latte.  From there I basically curled up in my chair in the back bedroom and spent the day attempting to get some  stitching down. For those of you who do various needle work, you understand that it is a process that begins with figuring out what you want to stitch, assembling the supplies (aka kitting up a project), followed by actually stitching over however long a time period is required.

The catch in all of that is estimating how much of what is going to be needed. I rarely purchase kits which leaves me guessing at how much floss will be needed.  I am now at the point where I have used up one color or another and have to go on a floss hunt. But in doing so for the last section of Carolyn Manning’s Mini-Tree Hugger – I found the missing spool of Sulky.

So – 438 stitches into the Pyramid 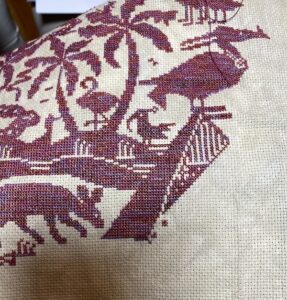 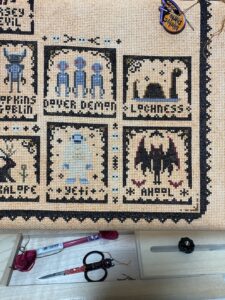 and I finished that 12th and last tree – 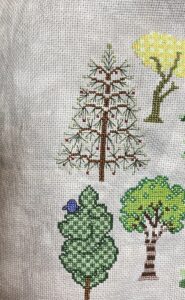 which only had about 300 stitches according to PatternKeeper (and sent me searching for all four colors) but all the back-stitching just about drove me insane. 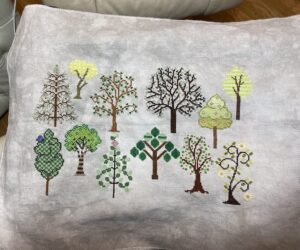 and here is the full dozen mini-tree, each of which could make a cute ornament or pillow if you are into such things. They are deceptive – each is between 1000-1900 stitches.