It was a long day. A really long day if you want the truth. Taking the 0558 BART meant that I arrive at Powell Street in time to catch the 0650 shuttle. One minute earlier and I could have boarded the 0640 shuttle which was pulling a way as I thought about dashing down the street. The end result of going in early was that I was through the labs and had seen my doc in plenty of time to not have to worry about hurrying infusions. Its a lot of fluid – more than I drink in a normal day just going in the IVs which means both my kidneys get a work out and I help wear the track in the floor from the loungers to the loo. 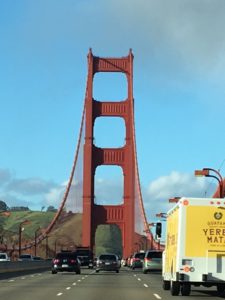 and across the Richmond Bridge turned out to be a lot faster than the projected route through the city. It was the financial district that was insane the other night with an average of one (1) car making it through per light which might explain the almost 2 hour journey home.

I did some knitting and finished an audiobook – Kelley Armstrong’s second in her Yukon Territory mystery series – A Darkness Absolute.   The narrator is excellent and the short punchy chapters make it easy to stop and start listening while keeping up the pacing.

The knitting was – from left to right –

band for a new hat, a number of rows further on a sparkly hat, start to decrease in red silk 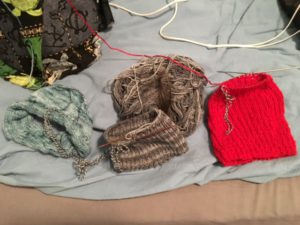