We docked in New Port – 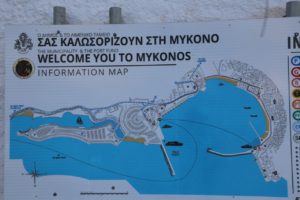 a map for orientation

rather than drop anchor and deal with tenders like the other three ships in port (Costa, Regents, Silver Seas) which dropped their passengers off in Old Port

I took the path less traveled which means walking the 30 minutes from the ship to town rather than paying for either the WaterBus or shuttle bus.

I appreciated Mykonos a bit better than Santorini. I don’t think it was solely from not having to climb forever to get to the town. I certainly don’t think it had anything to do with the number of otherwise well behaving adults getting on Mopeds and ATVs and certainly not the result of driving gone wrong – 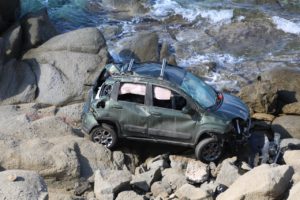 It was more the atmosphere of calm. Of whitewashed houses and shops, restaurants with patrons enjoying a coffee, balconies, flowers, all shining in the sun. Fresh air not laden with the smell of animals and clean streets also might have something to do with it.

On the edge of town, the four windmills, much newer than many of the surrounding houses attracted more than a few tourists: