yes, I decided to count again for a few days…

After a short hike up a hill, we made a stop at one of the monasteries. Boys start their training to become monks as young as 5. Which means obviously that parental or social pressure weighs heavily into the choice. Even prior to modern housing where the whole family lived in one room, I don’t know that anyone at age five can really make a life long decision – even death isn’t clearly understood till a few years later.  Anyway, the boys are referred to as monks from the beginning. A boy or young man who opts out somewhere along the line is called a returned monk which just may be a bit pejorative.

In this more enlightened era, although there is obviously state supported religion (Buddhism), the holidays, festivals and roles of the monks are integrated into the daily life of most. The boys not only learn the scripts, prayers, musical required instruments, today they are also taught their own language, English and usually a trade (self-sufficiency is nothing to frowned on).

Just a few pictures from the Chime Lhakhang –

the boys practicing their two hours a day

flags in the wind

going down to the village

one of the fields flooded

and then of course – there is phallus phun – on the side of houses for luck and fertility.

part of the day included a visit to a local woman’s house. A widow for the last 20+ years, she rents out part, gets a portion from another working her fields and hosts groups coming through for “tea” which had something to do with butter and hot wheat wine…..

a bedroom during the day

the “stairs to get to the living area

and the “tea” being fixed

Following lunch, our final stop was at Sangchen Dorji Lhundrup Choeling Buddhist College which was established five years ago by the recently retired IV King who just happens to live across the street high on the hill. 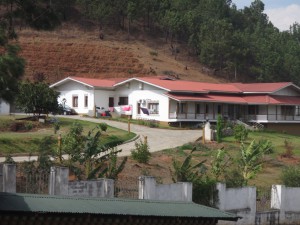 Unlike with the boys, the age of entry here is much higher and a personal choice. I did mention this is a monastery for nuns didn’t I?

completed stulpas with new going in between

the routine of removing shoes prior to entry

stulpa in the Nepalese style

and yet another style

On the trip home we viewed from across the river the historic fortress which burned several years ago. The temple has been restored in traditional style and reconstruction on the rest of the compound is underway 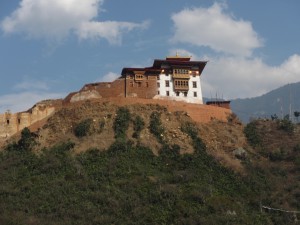 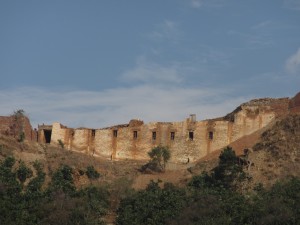 the rest of the compound yet to be redone