WesterCon – as you might have guessed is the West Coast Con which seems to cover a goodly part of the Western US (today Portland, next year Tempe, Denver in 2018). The Con actually dates back to 1948 with its origins in the LA area. It first moved out of California to Seattle in 1959. From reading the history – WesterCon has been held in Portland before (84,90,95, 01).

Besides the kids track (there is always a kid’s track). There are also Mermaids –

with their own pavillion

relaxing in the pool

who are running classes on how to be a mermaid. I am not sure what magic they are using to revert to their two legged forms. 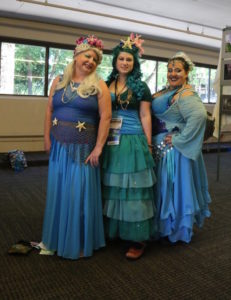 I met them early on, having volunteered to work program participant reg and the Green Room. Where else do you find sea colors and tons of waterproof makeup?

And then there is the phenomenon of Filking. For those of you who are not familiar, just follow the link to Wiki. Think music, song with fantasy, nerd, SciFi themes often parodies on popular music. By best estimate – the name came from a corruption of folk music and stuck. It forms a solid portion of most conventions programming. Alexander James Adam is the Filk Guest of Honor. The lead off performance was PDX Broadsides, a local Portland group (duh) who are both good and extremely funny. They restricted themselves to songs which can be sung when children might be around as it was 1500. Except they did do Nathan Fillion – please take …..  (if you don’t get the reference – Firefly, also starring role in Castle).

The Con – (which also includes GearCon which makes for great entertainment and hall costumes. Steampunk for those not familiar what a track at a Science Fiction would have to do with gears….) 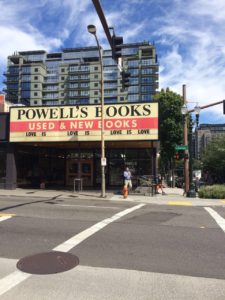 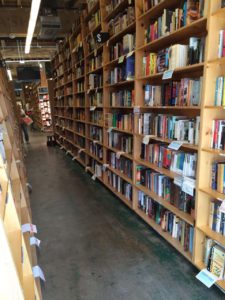 of floor to practically ceiling books