We sailed in early this morning and docked at Sullivan’s Landing promptly on time. I spent a few hours just walking around Hobart. I discovered some trivial things here – Woolworths still exists – as a downstairs supermarket. I bought chocolate bars….

Of note, like most harbor towns, there is a fair bit of up and down. The streets are all carrying classic UK names (some English, a fair number Scottish) and I see no evidence of renaming.

If you are ever coming here – it is worth noting that if you want to tour the Synagogue – it has to be arranged ahead of time.   (the link will take you to their loading page). The history of the building is actually what you would expect given the attitude of that time and governance. Like many historical records – I don’t think ignoring or coloring it over does any of us any good. 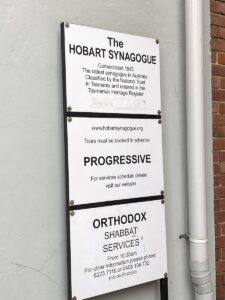 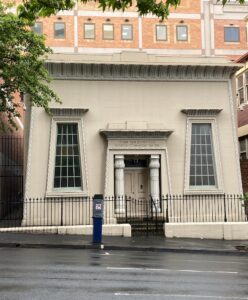 Since I wasn’t exactly organized (or did any research ahead of time)… I moved on to the Tasmania Maritime Museum – which is located closer to the harbor. It is a two story building which provides both an incredible old detailed hardwood stair case as well as a lift for those who might not be as mobile.

I spent more than an hour looking at the exhibits which detailed exploration, had some fascinating maps, and a replicated captain’s cabin from an Australian Navy Vessel decommissioned in 1994. Amazing amount of space considering all…

Only other thing of note in the morning – there was a bit of damp and the occasional mist/rain drop. All the locals were carrying umbrellas. Really? There wasn’t enough moisture in the air or coming down to make anyone from the US Pacific NW think it was anything other than a lovely day.  I decided to skip the Tasmanian Museum of Art & History.  I just wasn’t up for finding out how much of the ugliness of the colony and genocide was recorded.

Since my evening was spent out with wildlife – that is in a separate post.

fiber person - knitter, spinner, weaver who spent 33 years being a military officer to fund the above. And home. And family. Sewing and quilting projects are also in the stash. After living again in Heidelberg after retiring (finally) from the U.S. Army May 2011, we moved to the US ~ Dec 2015. Something about being over 65 and access to health care. It also might have had to do with finding a buyer for our house. Allegedly this will provide me a home base in the same country as our four adult children, all of whom I adore, so that I can drive them totally insane. Considerations of time to knit down the stash…(right, and if you believe that…) and spin and .... There is now actually enough time to do a bit of consulting, editing. Even more amazing - we have only one household again. As long as everyone understands that I still, 40 years into our marriage, don't do kitchens or bathrooms. For that matter, not being a golden retriever, I don't do slippers or newspapers either. I don’t miss either the military or full-time clinical practice. Limiting my public health/travel med/consulting and lecturing to “when I feel like it” has let me happily spend my pension cruising, stash enhancing (oops), arguing with the DH about where we are going to travel next and book buying. Life is good!
View all posts by Holly →
This entry was posted in Jewish Life, Travel. Bookmark the permalink.

5 Responses to Maritime Musem – Tasmania 1 of 2