Since Princess Cruise Line’s current plague ship – the Majestic Princess arrived today and was berthed at the Overseas Passenger Terminal, my ship moved to anchor within easy site, sound, and travel of Sydney. Very smartly, instead of fussing with tenders, they contracted with Captain Cook Cruises for the use of some boats of a style and build completely suited not only to the bay, but much better passenger support (latrines, real seats, an observation deck on at least one of the vessels. It made the loading, ride, and disembarkation run much more smoothly.

Initially, there had been talk of two drop off locations: one being the above named location to the non-Circular Quay side of the Opera House and the other around the far side of the Bridge. That second one made no sense. Yes, it is on The Rock, but nowhere near as accessible to the CBD (Central Business District) and would involve the water shuttle having to cross all of the ferry lanes. Not smart on a good day.

I drifted over early and wandered the city with the added benefit of little traffic and few pedestrians. Most locations don’t open till 1000 on Saturday. The Queen Victoria Building was open early and the first level coffee shops were doing a decent business. I hiked up a couple of stairs to be able to have some peace while waiting for my two target locations to open. 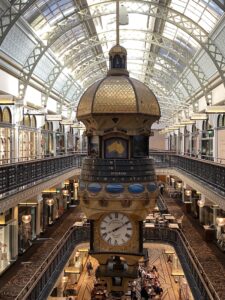 Then there is the clock – 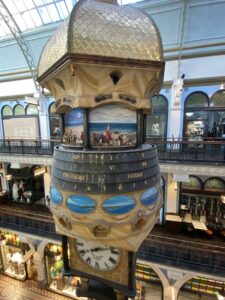 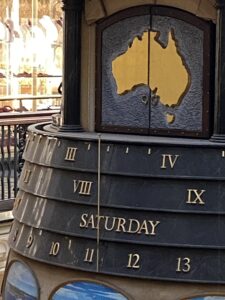 Once I had made it through the book store and Morris & Sons I headed back to the ship. Both are located on York Street – the bookstore past the QVB and the yarn/needlework store a couple of blocks before – as counted from the OPT.

The jacaranda are in bloom. 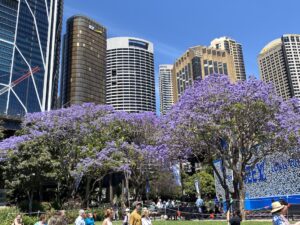 (and thank you all for the reminder that Man O’ War is also a huge jelly fish. But anyway – here in the Wiki Link