The sun appeared on the horizon just before 0800 this morning rising as fiery ball rising from the sea. Glowing large and orange, it bathed the sea in golden light before slipping behind strands of clouds and seemed to gradually diminish in size,

And now that I have waxed on about the glories of morning which also included a quiet deck 8 forward lounged and copious amounts of coffee from 0600 on… I watched as we sailed into Malaga harbor. We sailed past an MSC mega container ship (random estimate of containers by counting height length and depth >2000) and the MSC Simphonia which I thought was just sitting at dock (it had passengers as we later found out).

Avoiding organized tours, according to George’s watch, we hiked about 10,000 steps around the city and up and down.

There were orange trees – 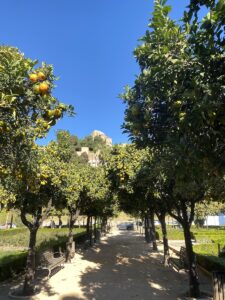 walls from many ages – 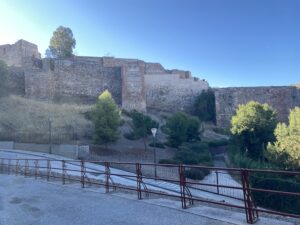 the old walls above the city 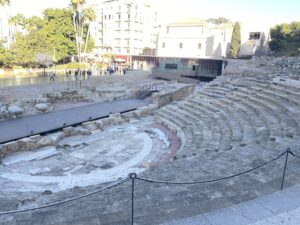 and the old amphitheater

lunch was from the grill on deck 8. Supper was supposed to be an outdoor BBQ on deck as well. I skipped it after going, finding out that it was noisy, crowded and featuring pork, pork and more of the same. Tofu kabobs just don’t make a satisfactory alternative.

We were underway about 2000 toward Cadiz. 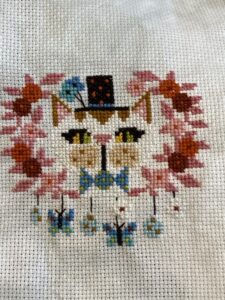