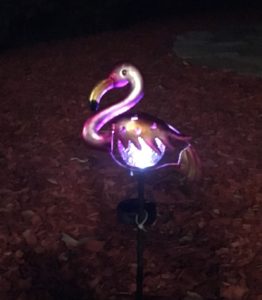 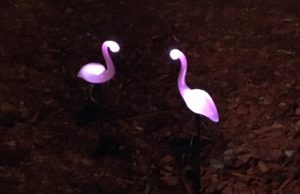 both heads and bodies

I know that I have shown you my solar powered lawn flamingos. They certainly helped last evening when we had to climb the flight of stairs to our house. Most of us who live in cities are so used to the light pollution that we don’t even notice it. Until the power is out and block after block of houses are dark. As we drove from Shana’s home in Richmond back to Berkeley, there were lights, traffic signals and a significant amount of traffic. Starting from San Pablo onto Marin, at the traffic circle we head up Los Angeles which comes to end at Spruce. The west side, the downhill side, is brightly lit. The east side is totally dark. Right onto Spruce, left on Eunice up the hill to Euclid. Dark, all dark.

Inside the house, it was really dark. Borrowing a couple of matches from Dani (she and Alex had tea lights every votive they owned arrayed on their kitchen counter) I found a couple of large scented candle jars. This is fire season – I only wanted flames safely inside glass containers. I could have done without the scents – but hey, you use what you have,

Then I remembered the birthday present Shana gave me (correction – she says Carmen is to blame! Carmen emailed, she swears that flamingo is Canadian. But then it would be like the Canada geese, no passport. Canada Flamingo? The final estimate is that I can jointly blame Carmen and Stu).

But it turns out he does this! 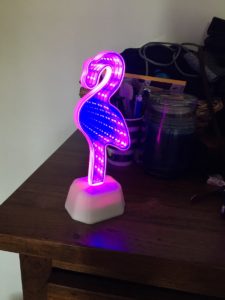 which is very bright in a dark room

Bright enough to use as an alternate to a phone for a flashlight. Just about bright enough for me to start and monitor George’s IV antibiotics (which will finally finish on Wednesday).

And bright enough to use as a nightlight as I staggered around the place this morning, getting ready for the drive into San Francisco. The traffic was horrible. Ok, probably not as bad as DC, NY or LA, but I am not driving there now am I?

As it turned out, the trip was well worth it – platelet transfusion as expected. But no blood required so we were back out of the city before noon. Even better, he doesn’t have to return till Thursday (rather than Wed & Fri) so I am more than pleased. There is actually a chance I might actually get a chance to sleep in one morning.

It was about 1430, Dani and I were upstairs looking for potential costume materials for her when my stereo started blasting. We looked at each other. She flipped the light switch – there was LIGHT!

The power was back on. I am not going to count on it lasting. The winds are due to pick up again tomorrow. But I am taking advantage of it for the moment. Shana is spared having to feed us supper again. There is hot water! The kettle works! I can actually see to hook up IVs. For that matter, I can even charge my phone.