We sailed in through mist and rain yesterday . Not a completely auspicious start when you add in a delay inflicted by the port authorities as they didn’t have an available berth at the previously agreed upon arrival time.  Since we weren’t scheduled to leave till mid-day or so today, I suppose someone thought that would make up for the delay? Who knows – since in any case, it was Sunday which kind of interfere with much of the normal walking around port city entertainment.

I did mention the mist and rain – right?

Anyway, it seemed a good use for the raincoat which I had dragged along since California. There was only one other ship in port from a line which I didn’t recognize (Nicko – link here), which we thought at the time was probably German speaking.

Today we shared the port with one of the Aida ships as well as …. Even though the sun was shining, I decided just to stay put. Still not sure it was the best decision, but there you have it.

So anyway our wanderings yesterday – Madeira – given the fact that it was both damp and Sunday there was a limited amount of options in the mid afternoon. I wasn’t interested in roasted chestnuts, nor beverages.  We decided to walk all the way along the harbor to the old fort at the far end and then work our way back. 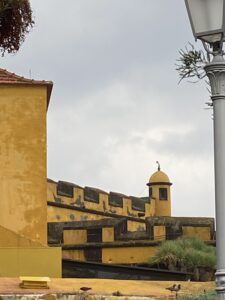 We decided to take the cable car up the hill just as something to do..

We decided that there much be a serious building code which extends beyond what might seem reasonable considering this is an island. There is such a uniformity in building construction that extends to the outer wall color (white->pale cream) and the roofs which are tiled @99%+ in red. 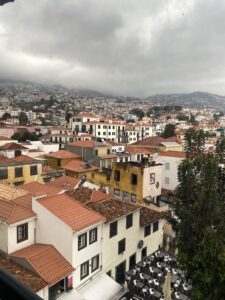 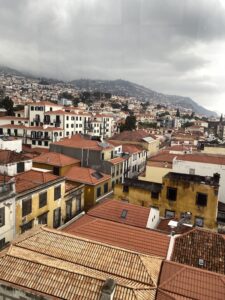 We could see our ship off in the distance, docked the closest to the city of the vessels in port. 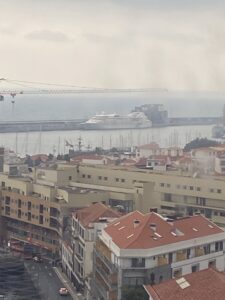 Looking down at roads winding back and forth up the hill 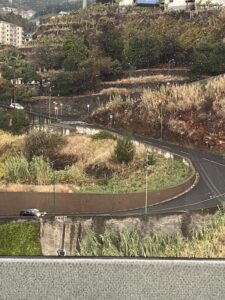 there was a steady stream of gondolas, most of them empty going both up and down 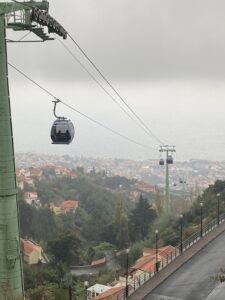 and as we headed into the lower station on return, of course the rain increased… 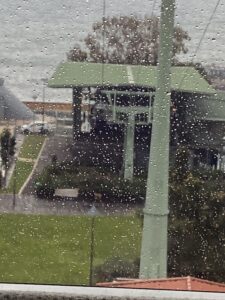 Then of course, there is the fish constructed completely of recycled materials.. 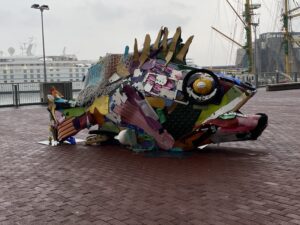 We are sailing out as I send this. Tomorrow is a sea day as we head northeast toward Lisbon.