I’ve been here before; back in my 10th MEDLAB days it was to inspect the occupational health program. I managed a trip back when Daughter #2 was just about a year old. Something about an interesting drive to first Vicenza and then on to Livorno as part of our radiation health protection course. The next time was around 2009 (which is along time after early 1990) when the NCL ship I was on stopped here. Maus and her roommate were my company since it was their fall half-term break. The girls and I walked to the train and, on a family ticket, went to Pisa. Up the tower, around town and then back to the ship (no Maus did not climb up the Leaning Tower).

This time I had every intention of getting off until I learned that we would be a fair distance from the terminal with no walking allowed. Of course, I could have easily afforded the 5€ for the shuttle, but I was irritated. Paying to be transferred to town I can understand. But ship to terminal? Of course, that shuttle bus also went into town.

Instead I prowled the ship. Apparently a demented demon struck the public areas sometime between 2300 and 0530 and vomited cobwebs everywhere. To add to the insanity, there are inflatable pumpkins, glow in the dark skeletons, spiders, witches’ hats, and dungeon signs. It is so tacky it is wonderful. Apparently this ship is going to take Halloween seriously. Since the holiday falls on our only sea day, I think it is going to be interesting.

Without further ado – the gallery….

face in the elevator

behind the atrium performance area

Entry to the Lounge

a long wait for the Lounge?

and I have made progress on the scarf – finally 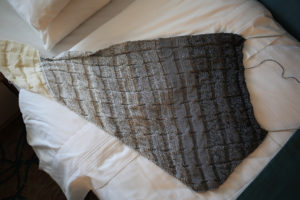