We arrived just short of the bridge leading into the center of Lisbon @0530 this morning. Once the pilot boarded we proceeded up the river to our docking location.

George departed late this afternoon for Frankfurt with a follow-on flight in the morning. I decided to get off as well. A brief internet search revealed a notions shop about 1.5 km from the ship. According to the website, it opened at 0900. 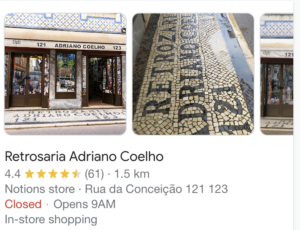 After bidding George goodbye, I walked along the river, past a huge P&O cruise ship, a military installation, and a museum before heading inland a couple of blocks. I found the shop complete with a neatly lettered sign informing all that the hours had changed due to the pandemic and would now open at 1000.

So I sat in the central square watching people and admiring the architecture. There are buildings with tiled fronts, those with tall columns plus the mandatory seasoning of religious buildings and statues of various dignitaries/heroes/whomever (like the one below from 1833). 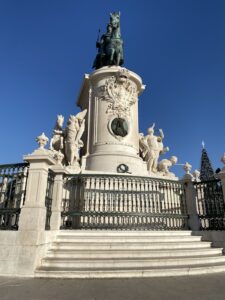 You would also know it Portugal by the sidewalks as there were various mosaic patterns everywhere. 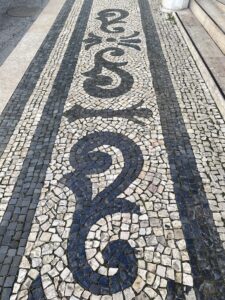 From the central square, it was an easy hike through the arch and down the main pedestrian zone with all the usual suspects for shops (and no, there was absolutely no competition with Spain for shoe stores. I only saw a couple).

About 2-3 streets up I made a left at the street car tracks and found the Notions shop. 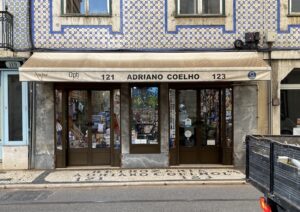 Inside it was exactly like I expected . A counter ran around three sides of the shop. Behind the counter, stacked to the ceiling were bins of buttons/fasterns/yarns/threads, trims and any other supply you could name. Fancy scissors and tools were in the glass cases below the counter. Since this was what I had expected, I had a list of my missing DMC colors. There were three clerks behind the counters fetching/showing and discussing the wares. My clerk found four colors, the fifth would be in tomorrow – but I won’t be here. Oh well. I happily purchased my thread, took another delighted look around the shop and wandered back toward the ship.

I have been relaxing this afternoon. Apparently the ship will be slightly over 1/3 occupied for the transatlantic sail. There are 29 of us remaining from the previous cruise and about 90 boarded today. Unlike most other cruise lines, if you were on the previous cruise, you don’t have to do a repeat on the muster drill.

We will be sailing in about 10 minutes and I want to watch from my “French balcony….