It is amazing that a city this size has a metro fare of 1.40 for anywhere/anytime in the system. What is more, an all day pass (including the rechargeable card) can be had for 6.50. Not like London where it was 12.50 or so the last time I was there before the system stopped taking chunks out of my Oystercard. And then there is the BART (Bay Area Rapid Transit) which, to my knowledge doesn’t have a 24 hour pass and costs more than 8.00 to get to the airport.

Even better, this is a European underground. Clean, well maintained, shiny. 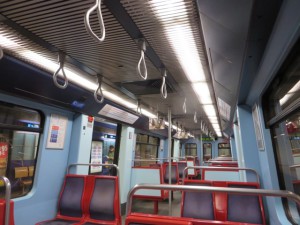 Inside of a car 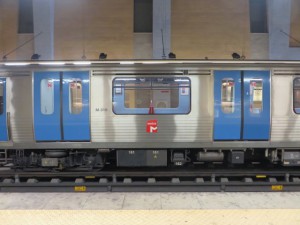 outside of the cars 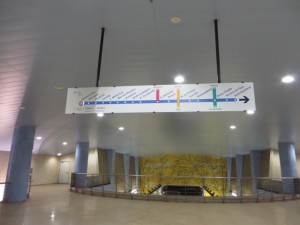 Starting at the beginning of the Azul (Blue) Line

And make it easier – each one of the stations has a motif which lets you identify where you are even if you can’t see the signs (long harangue about US stations where you can’t find the signage to give you a clue as to where you are or which line you might have boarded. BART really sucks in this respect).

Or the University on the Yellow-

As you can guess, I spent a few fascinated hours riding around on the system. Popping up for air here and there like the creature in Whack-a-Mole I kept ducking down and heading in a new direction. I found interesting stations on all four (Blue, Green, Red, Yellow) lines and clear signage that I could follow. That last bit is amazing since I really don’t understand Portuguese at all.

What amazed me was the lack of random defacement found in so many other systems. The only large scale wall art I saw – 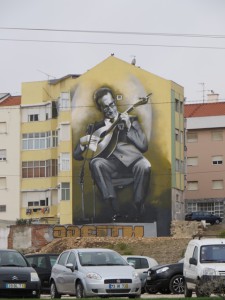 Seen at the far end of the Blue Line 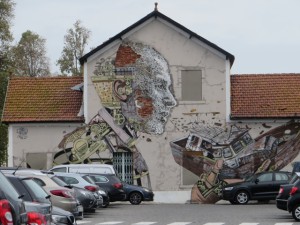 Next to the port

I managed to miss the rain completely – but the fog rolled in as we were headed out to see leaving it difficult to grab my usual bridge photo…. 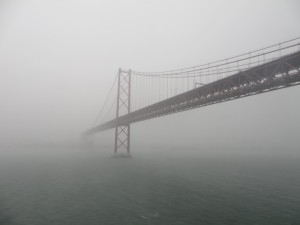