My skin normally starts to crawl when I even think of facing the traffic into San Francisco from my side of the Bay. Since this is Thursday, George has an appointment at UCSF.

Taking a deep breath, I made an early run to fill the gas tank. Trust me, the very last thing I want to do is run out of fuel on the Bay Bridge and become “one of those idiots” who impact traffic with their rudeness. I think you understand. So, full tank of gas (petrol) followed by a coffee stop at Peet’s for human trip fuel before heading back to the house to grab my passengers. Since Alex had to make a run into the city today, I had the three of us–the magic number for the HOV lane. Rather than committing myself to having to get off at the Fremont Exit, I skipped picking up a fourth passenger at the North Berkeley Ride Share and just headed out.

My least favorite part of the trip, if one could say that any portion of the trip was all right, is having to work my way across five lanes of traffic to get to the HOV lane from the University Avenue entrance. Three of those lanes are Oakland bound and they are by far denser than the right lanes. And, hello – this is California where a turn-signal doesn’t seem to mean much of anything. I can actually be appreciative of large trucks, they never ride the bumper of the vehicle in front of them so there is usually space that I can squeeze into.

Once we hit the HOV lane, it was clear sailing all the way to the San Francisco side of the Bay Bridge. Even the traffic up Olivia wasn’t that bad. All in all, we were at UCSF in less than an hour from leaving home, an unheard of fast trip for rush hour. George is stable, getting a bit stronger everyday. It would be really nice if his red blood cells and platelets were recovering as fast as his white cells, but I guess we don’t get to have everything. He has been shifted to weekly visits from twice a week, so that is excellent from my point of view.

After we returned home, I spent the afternoon organizing my studio a bit more and machine embroidering lace doilies, just because I could. And, they are pretty mindless with few, if any, color changes. 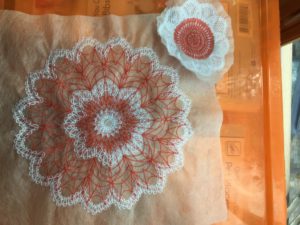