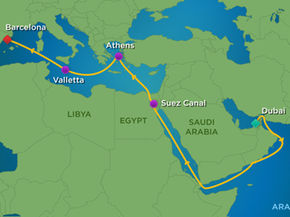 When we arrive in Barcelona, the Legend will be leaving RCCL and going to Thompson/Tui.  We will be setting sail in the evening. I am hoping for the Suez during the day since one can never have too many digital photos, can one?  I might get off the ship in Malta, but haven’t made that decision as of yet.

It will be a bittersweet journey. I really like the ship and staff. There are ships which I have cruised more often, mostly because of location and time frames. But the Legend? She has been the venturesome ship, the one to try new ports, new travel routes.  I understand intellectually the idea of disposing the smaller and more expensive ships, but there are of those who pick them for their size, lack of whiz-bang and diminished number of the under 15 set.

The Itinerary as Planned

From Barcelona, I will be beating feet for the airport. Due back at the Center on the 29th and should still be pretty much timezone whacked.

BTW – I did get off the ship today. We had to, otherwise I didn’t see the point. Since the shuttle bus to the mall was free – that seemed like a much better deal than hanging out in the terminal.

The usual buildings were passed. The Frame is still…… under construction and just as stupid looking as before. Pictures obviously taken from the moving bus…

Surprisingly, some items are limited. For example stationary supplies and reading lights. No one carried the Pilot erasable pens and apparently clip on reading lights, even LED, are now passe.  Back on board by noon, the DL was the place to hang out till it became well overcrowded…