is a first world problem. Both George and I have more than enough clothes to make it through a couple of weeks. We have several changes of bed linens. We have plenty of towels (hello? perhaps I should say bath sheets as those I brought home from RCCL cruises never seem to die).

So the basket fills up with clothes needing a wash. Then a second basket fills up. This morning I decided that it probably was my turn and started hauling both baskets toward the downstairs utility room. Especially as I took a look at the linens and towels.

The last load is in the dryer – mostly towels and jeans. I now have clean clothes stacked on the bed. Mine fall into five neat piles. There are leggings, Uniqlo support tanks, underwear, socks, and pullover tops (most of which have hoods). That is it. Nothing fancy. Nothing that needs a hanger. Absolutely certainly nothing that would ever, under any circumstances require ironing.

It is now back to stitching…. 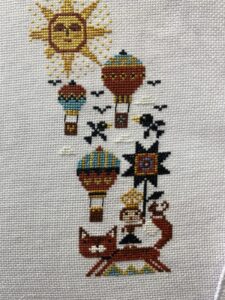 And then I realized that there was still a load in the dryer. At least it is towels and jeans. Nothing that can’t get wrinkled.