↓
Home→Fiber→Cross-Stitch→late to arrive, early to rise

You would think that after landing close to 0130 in the morning at SFO. Having the “exciting” challenge of finding my suitcase and getting home after 0200 I would have crashed till midmorning. Oh, not so.

But first – EWR. We finally took off shortly before 2300 I believe. The flight was quiet and not as uncomfortable as it could have been. It doesn’t help that there was only one jetway. So all of us seated in cattlecar in the rear had the opportunity to see 1st class, business class, premium economy, and mid-range seating before finding our seats. The new 777 also has more headroom which is accomplished by smaller overhead bins.  (Queue unhappy people with wheeled cases greater than 19″).  I will say I prefer SW’s boarding process. It is much much faster and the isles are wider. I don’t know how anyone with either a mobility challenge or a significant number of excess weight manages to get to their seat.

On landing, I was greeted with a txt that said my suitcase arrived on an earlier flight. The baggage claim area was a mess. At least a dozen areas roped off packed with luggage. Three poor clerks attempting to help people locate luggage. No signs on any of the areas indicating origin of the luggage. The upset passengers performing for everyone wasn’t helping the line move. I left George in the line and went on a scavenger hunt. Finally locating my lonely little bag three areas past the service counter, I attempted to check out with one of the baggage attendants; no dice, the four of them were so busy complaining to each other they couldn’t be bothered.

I could have loaded up a luggage cart with all sorts of interesting bags and just left. Some security. I just wheeled back to George, we headed to the car and home. So why, I wonder, was I up at 0700 (PDT)?

Anyway, I spent the day upstairs in my craft room away from everyone. I am staying quarantined for at least a couple of days. Unlike my previous experience, no one here was ill, but I still don’t want to take any chance. A couple of nights sleeping upstairs aren’t going to hurt me any. 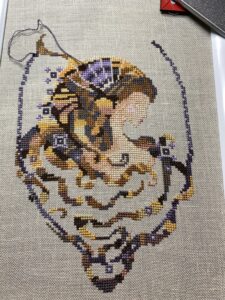 I managed a lot of stitches into Leo (the Seventh Zodiac girl). Other than backstitch, beads and a few random stitches, I have only the top of the “frame” to complete.

Tues-Thurs are going to be a lot of errand running. I am hoping to finish the Bear as well. .