It was supposed to clear according to both our Captain and the weather report; the rain that was steadily falling as we docked. It isn’t that far from Venice but no ship wants to dock in the middle of the night and pay docking fees for time that could just as easily be spent bobbing at anchor just on the edge of International waters.  Accordingly, at 0700 we were at the pier and cleared shortly after that.

I sat watching all those who had tours disembarking with their umbrellas while having breakfast. Waited another hour. The rain seemed to stop so off I headed. Since the ship was docked at the edge of old town walking was the way to go. As should be obvious (this is the 500th year anniversary)  it is an old walled city. 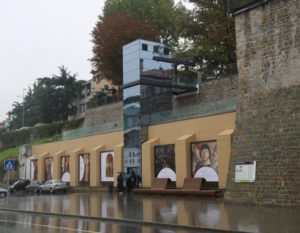 elevator to the old city

and from the top (a lot of steps, going right past the bells) which (trust me) ring on the quarter & half hours as well as on the hour….


to look out over the city.

out over the old city

part of the complex

I enjoyed walking all the small streets, looking at fountains, small shops and gardens

map of the old city

one of many entries to back streets

What I didn’t enjoy was the rain. My lightweight jacket was fine, but didn’t do very much for keeping my bag and camera dry so I broke down and invested 7.50€ in an umbrella before stopping at the bookstore which dates from 1550 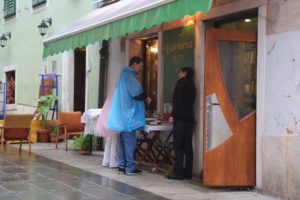 In a couple of areas you could see the combined effects of centuries of buildings as well as the milder climate which lets you grow lettuce even in Oct.

The last square where I stopped had a house from the 1400s, an old house related to the shipping industry and an arched section now setup as a protected outdoor performance area.

nautical with sailor’s knots in the wall texture

the plaza and performance area

Soaked by the time I made it back to the ship I spent the remainder of the day reading and drying out. 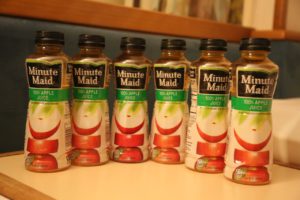