I might well consider the cruise line’s offer. If I didn’t have other things that I would rather be doing. And if the ship was going somewhere I hadn’t been before. And this would comply with a number of additional reminders from Ron: – don’t fly in on the day of the cruise; don’t let the ship leave if your luggage isn’t in your cabin; cross pack if you have a partner. And I would add – check around you so that you don’t leave a bag behind in your transportation to the ship. )

Anyway – Windstar apparently has more than half of the current passengers heading off in Lisbon and less than a dozen boarding. They have offered an incredibly reasonable price for anyone who wants to extend their cruise through the next Lisbon-Lisbon leg. Unfortunately, that extension no longer includes Morocco. So it would be Gibraltar and several of the Canary Islands. They haven’t figured out that waiving the single supplement would probably get several of the other solo travelers to stay. This crossing had a significantly reduced single supplement. (what is better? charging a solo passenger double? Or having an empty cabin which translates into no passenger, no daily service charge and lack of work for the staff….)

And, in any case there are plenty of things that I need to do around the house before I take off again. Staying would be just delaying the return flight home….

And, on the stitching front – I actually managed to get a couple of photos to upload. Even clicking on them, they won’t embiggen much as serious reduction was the only way to convince the server that I didn’t want to spend hours on uploading. 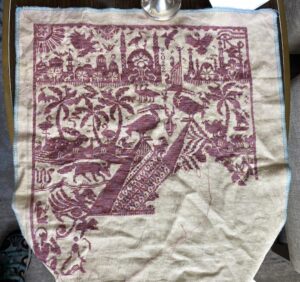 So I am making steady progress on the LongDog Sampler (>62%) 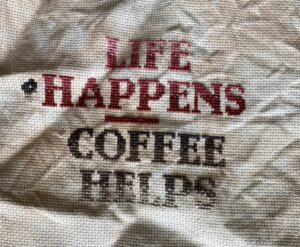 Started as my airport/airplane and cruise stitching – The words are done, now all I have to do is finish the ring of coffee beans. (Forbidden Fiber Co) 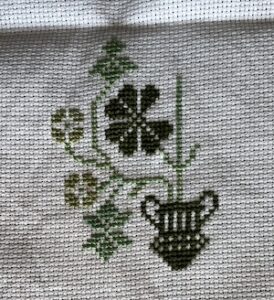 And finally – this is my start on the March Quaker by Heart in Hand. It isn’t hard, not very complex, and only three colors. So I am counting this one as my “new Cruise, new start.” Given that I want to finish up the Coffee, and the Long Dog keeps calling me – I probably won’t get it finished before the end of the cruise.