We arrived in Malta just before sunrise with early morning light gleaming off buildings strongly reminiscent of the rest of the Mediterranean. High city walls, fortresses and towers abound on both sides of the harbor. The NCL Spirit pulled in an hour or so after we arrived and departed just before us. 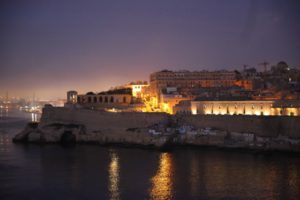 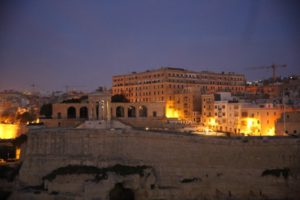 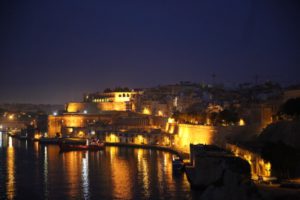 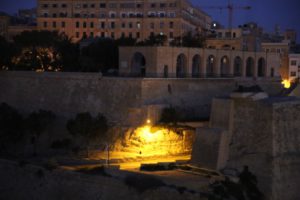 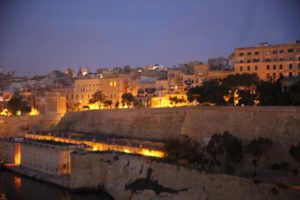 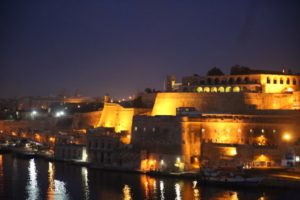 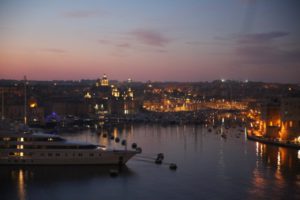 Since I was just in Valletta last Oct on the Rhapsody and walked part of the area I decided to spend the whooping 10€ for the bus. The first route was out to Mdina which was lovely in spite of the “rush hour” traffic. Since the Captain wisely had decided that changing time zones (back an hour followed by forward an hour) was not worth it it meant that several passengers of course complained about it being too early for shops to be open. Oh, wah.

Anyway, arriving back in Valletta, it was going to be an hour till the souther loop bus so I wandered over to the lift up to the city. 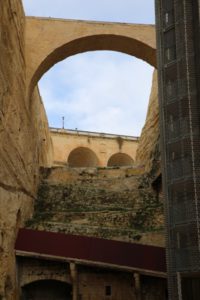 up close before I started the climb 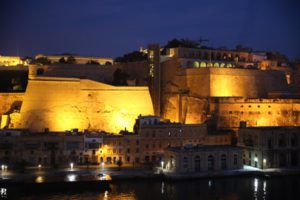 the lift on right as we sailed in

Then found that I was wrong. It wasn’t 20 flights of stairs, it was only 18…. Cup of tea at the Grassy Hopper on Old Theater Street while I was waiting for everything to open. In case anyone needs to know, there is also free WiFi in the central plaza.

What Malta seems to have more than any other place I have been, including Rome, is churches. It seems that there is a large edifice on every block in the city and multiple examples outside the main city. As you might expect, I didn’t enter any. It seemed that most were running a morning worship service. I am always appalled at tourists who seem to think it is perfectly fine to wander in whenever, take photos and leave. Just because it is not my flavor doesn’t mean it is alright to be disrespectful. (off soap box).

By the time I wandered back to the HoHo (Hop On-Hop Off) stop it was about 1230 ships time. Standing in line for the southern route, the ticket seller mentioned that the loop took about three hours. Three hours? We are supposed to be back on board at 1630 and me without sunblock or water in the lovely strong sunlight. Not my brightest idea. Off I went – back to the ship.

The final entertainment of the day was the Parade of Flags which I always find fun. Getting there a few minutes (ok about 25) early I claimed a place at the middle of the 5th deck railing overlooking the Centrum.  The colors are weird, but the lighting was a bit off and I am not a fan of playing with photoshop. 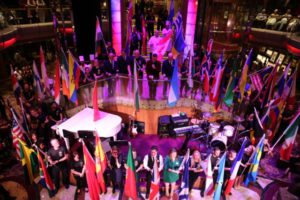 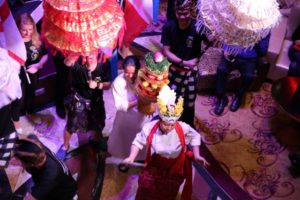 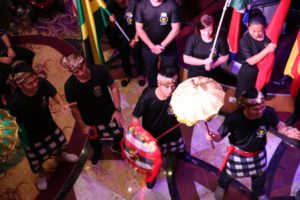 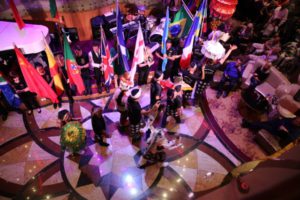 and some of the countries with the fewest crew members on board were some of the most enthusiastic. 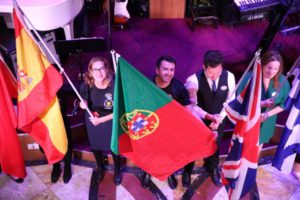