↓
Home→Uncategorized→He took me out to the ball game…

Oakland A’s vs Detroit Tigers. Actually, we were given a pair of tickets for tonight and George and I seemed to be the only people around to use them. So we hopped on the BART at North Berkeley and got off directly at the Stadium.

The A’s are not doing well this year as they so aptly demonstrated tonight. 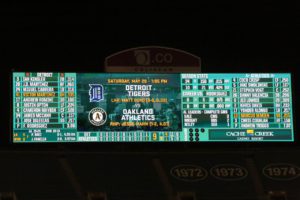 In spite of that – I took some pretty good pictures and had a great time.

the ball on its way

and then there were the batters. With shots from both teams, some hitting the ball, and some not

and then there is 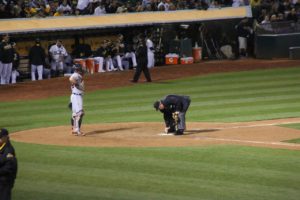 an umpire brushing off the plate 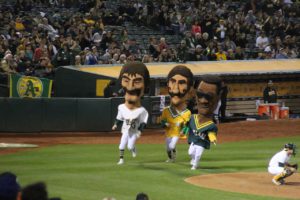 some kind of entertainment involving oversized bobble heads running 1/2 way around the field.

It was obvious that some who were attending were mainly interested in junk food and talking continuously. Which made for very interesting people watching. As George reminded me; not only are these the least expensive games anywhere in Major League Baseball, but no one expects you to dress up.

It was all good.