Now, as you have probably figured, I ride BART regularly. But as it turns out, I am really only familiar with a couple of routes. I go into SF or to SFO or to the Coliseum/OAK and from any of them to home. What I don’t do is travel from downtown SF to OAK.  So there I am, after an interminable bus ride on the #38 from the SFVA back to the BART. Getting on at Powell, I grab the first train going in the right direction figuring I can change at either Embarcadero or West Oakland. It isn’t till I am sitting there staring at the route map on the inside wall that I finally twig to what would have been obvious to anyone else. I got on the Dublin/Pleasanton line. I can change trains, but there really wouldn’t be much point to it, the branching off from the Freemont line happens AFTER the Coliseum. Duh!

So I listened to an audiobook and continued to knit till my stop.

The reason for doing this detour? Picking up an extra ticket for both the As vs Giants Game  1 April and opening night 3 April. Did I mention that paying the extra BART fare and walking around the entire freaking stadium was cheaper than buying the tickets on line?  No service charge when purchasing in person and I get my season ticket holder discount…..

just a stray end or two but – 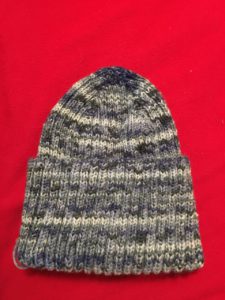 the blue hat is done 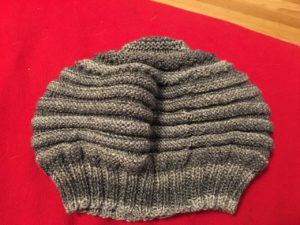 the small glittery beret with circles is also finished 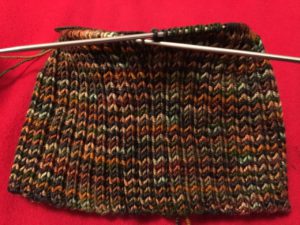 and I’ve a good start

on what I am now calling the safari hat.

All of this is to take my mind off now having antibiotics to take on a daily basis (something about not too many white cells left) which might be balanced out by at least a bit of progress on tumor reduction. Back again for chemo next Wed.