It seemed almost decadent to be at a hotel until 0915. We were still opposite the airfield at the hotel in Paro where the drive to the airport took less than 15 minutes. Being dropped off, it took almost no time to get through security and checked in, then it was just a matter or waiting till our flight was announced. The young woman who was the walking PA system just goes through the terminal area, calling the flight in the appropriate languages. Since there is only one flight departing at a time and usually no more than three flights total leaving each day, the system works.

Our arrival in Nepal was smooth, the OAT pickup went without problems. The Gokarna Forest Resort is located on the grounds of the old royal forest/hunting preserve. The 500+ acres are extensive enough that the hotel requires you to hire a local guide in order to head into the heavily forested area. Since that guide is also a naturalist, it pretty much makes sense if you want any idea of the birds you are seeing. It also means that we are out of the city. Significantly out of the city (only 4 million people all of whom ride a motor bike when not behind the wheel of something larger).

The monkeys – no problems in identifying them. Also no problems in getting things stolen if you are careless enough to leave doors, window open or attempt to hang laundry outside a hotel room. You can also hear them on the roof. 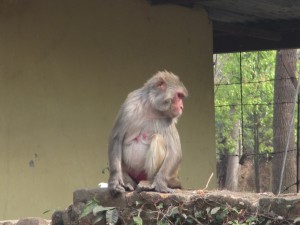 We took a short walk through the local village seeing new construction, and talking with various people. 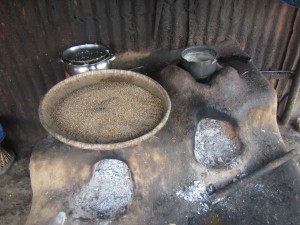 the stove at the local bar/grill

Clay oven which has reverted to wood burning due to the propane shortage. I had the pounded rice with some nice pickle, everyone else tried the curried lamb..

young lady on her way home from school

One thing for sure, the food at this hotel is nothing to write home about. We all expressed our preference for non-bland food and local food rather than pseudo-Western. Since we are here for three nights, it will be interesting…