It seems like I spend my days getting there. From here, to there and back again. Or to the ballpark, grocery store, diner, UCSF. Not necessarily in that order, please understand. But the idea of having a whole day at home is really appealing.

I am thinking I can schedule it for next Tuesday.

Unless something else comes up, just saying.

between now and then? UCSF tomorrow day, perhaps the As in the evening. Same for Friday. Saturday and Sunday are going to depend on whether or not I can spring George, which is starting to look more hopeful than earlier in the week. If he escapes, then it will be back to UCSF all day Monday as an outpatient. Which takes me to Tuesday – which is where I started this conversation.

I spent the morning at UCSF. George actually had a few platelets of his “own” this morning so that trend is hopeful. The attendance at this afternoon’s As games was less than optimal but considering it is a Wednesday afternoon, there were the usual serious fans, retirees and busloads of school/summer camp kids. The As pulled off a nice win and swept the series. Considering we were facing the poor Baltimore Orioles, it could have been embarrassing otherwise. 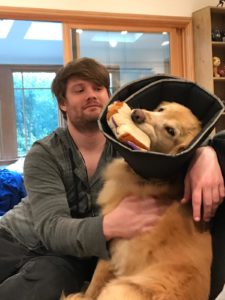 who is suffering a cut necessitating the cone of shame.

After taking the crew out to Barney’s for burgers – I started a new puzzle (Ecru–from Artifact Puzzles) before wiping out completely. 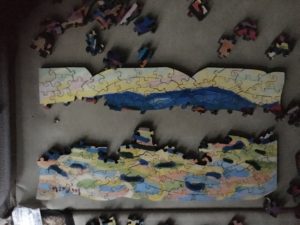 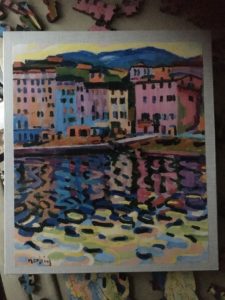 the picture of the finished puzzle