I think Barbara Ana (the Spanish designer) is on a kick. Or else Creative Poppy which carries her patterns as locked PDFs has convinced her that stitch-a-longs are the way to go. I finished Dreaming Frida (third and final part was released 1 May) and started the new SAL a couple of days ago. Again, this is a three part SAL – with the first part 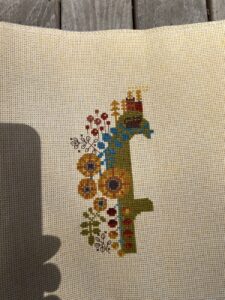 stitched with the called for DMC on 18 ct Sunshine from MyVintageNeedleArts on Etsy which I picked up on sale as an orphan. The total design size will be ~ 6×6 (give or take a millimeter or two). Given there are flowers, a house or two – there has to be a girl (with closed eyes) in this one as well….