Anyone who has ever had a dog or cat has probably had experience with the cone of shame. It is that wonder plastic collar with cone extension fastened around the beast’s neck which prevents it from apply mouth to whatever portion of the anatomy is injured or recovering from surgery. The animal, at least dogs, look totally and completely embarrassed to be seen sporting such an unfashionable statement which attests to their inability to leave that bit of injury/surgery/stitches alone.  Cats just look annoyed; probably to the extent of applying claws to the perpetrator of the cone.

We have the garage of shame. You have heard me complain and moan about it now for about two years. Our household shipment (thank you Uncle Sam) arrived in Fall of 2014 and was loaded mostly into the garage as the house was under renovation at the time. I actively avoided that particular location for as much of 2015-2016 as was possible. Meanwhile, we had things in and out of storage as the garage needed sealing, lights and new doors. Unfortunately (for me) it has been complete for a significant number of months and I still don’t have the place organized. Screaming, yelling, threatening and whining haven’t worked on me – why would I think that those methods would work on anyone else?

Admittedly, there have been a couple of spurts of organization. For example, after my shelves were built into the one bay I managed to unload a lot of boxes and sort a number of others onto the shelves. Then Dani & Alex moved here and contributed their fair share to the garage box chaos. Right now they don’t have a lot of room so most of their possessions are in the garage.

This is where I started this morning – 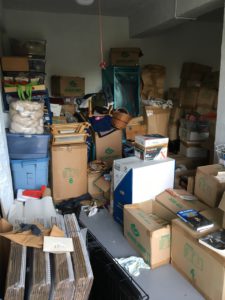 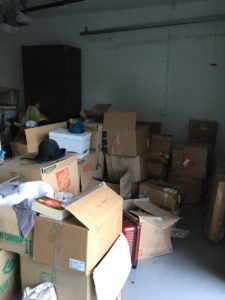 The first being the left side of the middle bay and the second being the right wall of the last bay on the right.

Noah and I put in a couple of hours during which we were able locate the loom which will be picked up later this week, unpacked a few boxes completely and located a number of items which have been missing since – well – when they were packed in Germany. Such as my Canon AE1 (film) which I had figured on being permanently lost, some scarves, clothing items and a number of cookbooks. George helped me haul the easy carry items up to the house. 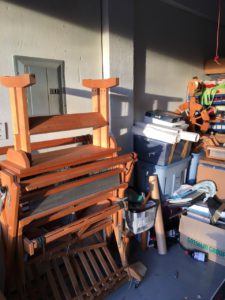 the loom ready to be picked up, other things sorted 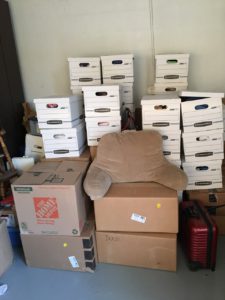 this neatly stacked cluster of boxes

which replaced the boxes badly placed and damaged by the movers in the second picture above.

This is real progress and perhaps I can actually both get the place organized and distribute all the things which would really be happier in other people’s lives.

I finished the alternate 363 this evening 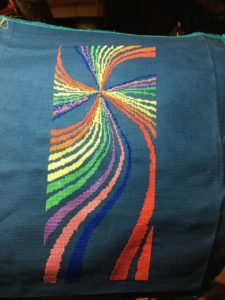 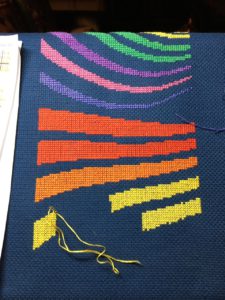 Tomorrow’s forecast is more of the same.