There are things about an 0500 that shouldn’t have been a surprise to me, but I was still blindsided. Bag Drop off for United didn’t open till 0330 giving only a 45 min window for checked luggage. I guess they think it is not longer a problem since just about everyone seems to carry all of their possessions onto the aircraft so they can be throughly angry when there is no overhead storage space. Me? If I can check a bag for free, I will do so every time.

Security opens at 0400. Boarding began at 0410 and there wasn’t a coffee to be had in the terminal area before 0500 including the United Club which also just happens to be open from 0500-2200. Go them. It is perhaps the only time I have boarded an aircraft without a line, without dozens of pre-boards or pushing and shoving because it is so important to be the first or second person in line rather than the fifth.

No pictures leaving SFO – as we climbed the fog promptly took over. The mountains between SFO and DEN are amazing with snow caps and a few obvious glaciers present. Admittedly from our altitude you can’t see much, but habitation was wonderfully lacking underneath our wings for most of the journey. 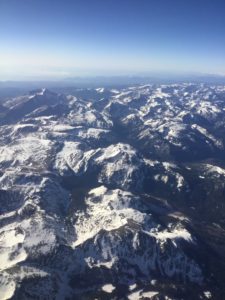 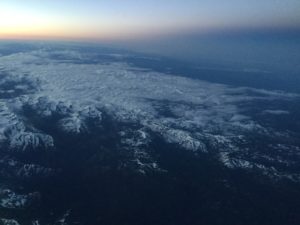 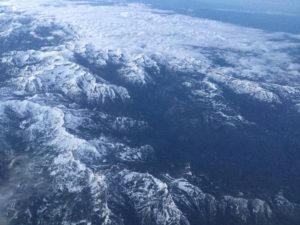 Unfortunately it was easy to tell when we approached Denver. And it wasn’t that the mountains started to flatten out or that there were threads of roads visible brown against the green. It was the air. From clear to nasty yellowish-brownish haze in a layer obscuring the high-rise towers of downtown in the distance. For what it is worth, the haze continued after takeoff as we flew east.

Now can anyone explain why architects, often known for designing extremely dull buildings more resembling a high-rise basement than any place a person of sense or discernment would want to live or work all seem to go nuts when faced with designing an airport terminal? Normal building? Nah, it is an AIRPORT. As such there seems to be a requirement for swooping rooflines, acres of glass and noise levels only marginally short of a train station with all platforms full. Denver is no exception. This is perhaps one of the weirdest designs I have had had the misfortune to view. Plops of snow? Stylized mountain peaks? Meringue? And the scariest part of all – this design pre-dates the legalization of pot in Colorado. 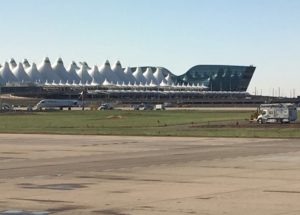 Speaking of take-off – or rather the events leading up to getting on our way – it turned out that we all exited the plane in Denver – Gate B24 knowing that if – and only if – you were continuing on to DCA it would be the same plane. A different flight number, a different crew and most likely different seats which explains why we all got off, hung out and then re-boarded the exact same plane, Sheesh. But at least I didn’t have far to go (gate wise) unless choosing to go on a search and purchase mission. Weather caused a bit of delay, but they will be handing me breakfast and the outlet at my seat works (unlike the first leg).

On arrival to DCA I managed to collect my luggage, insure that I had enough charge on my cell phone to insure ability to communicate and headed off to the Metro.

I like the Metro Cars – and I now know where BART received its’ inspiration: 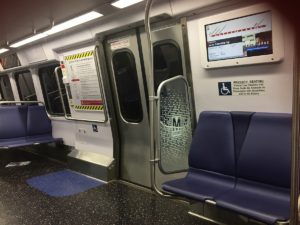 Yellow line to Gallery Place, Red Line to White Flint. Oops – train only goes as far as Grovesnor so yet another change. Carmen bailed me out there. Cell phones are so nice to have.