or so it seems. 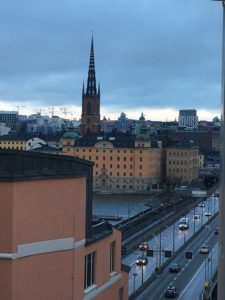 First one has to get from the hotel to the airport. In Stockholm it is not difficult. The cabs are a fixed price to the airport. All the taxis take credit cards. One can walk 2 blocks and catch the “T” which drops you off at the Central Train Station where you have three choices depending on how fast you want to get to the airport (Arlandia Express < Regional Train < FlyBus) and how much you want to spend (about the same order). Once at the airport you check in, deal with security (less than five minutes in line and absolutely no hassles) and hang out in the lounge. Board the flight for Copenhagen. Fly to Copenhagen. Disembark and make a run for the lounge - after all, one never knows when you will see coffee and food again.... Get through Passport Control, followed by hiking to the far end of the most distant terminal just in time to board the flight to SFO. Eat, drink and attempt to sleep for over 10 hours prior to landing in San Francisco. Since I happened to like the Mobil Passport App, it was 8 minutes from the jetway to bag claim where it seemed like I hung out forever. George decided that I was in need of getting picked up. We debated for a couple of minutes about attending the second half of the Cal Women's Basketball Game before deciding that dealing with parking just wasn't going to be worth it. Instead, it was home followed by dinner with Shana. And a desperate need for sleep.... Since I was up at 0500 in Stockholm and it was now 2000 in Berkeley (15 hours + 9 hours time zone is a long time to my poor addled brain)