and packing – which I really didn’t even think about till after supper.

First – there was an afternoon game. I remembered to trade in my ticket prior to the deadline for an extra ticket to one of the Mets games this fall. While I was at it, I swapped out another one so that I had two seats together. Always useful that… Of course, the As managed to win today. I didn’t look at the attendance, but it should have been better than yesterday.

I decided early that I just couldn’t afford to take off ½ a day right before a trip. (Getting to that portion later). So instead stopped by a couple of the kids homes followed by Costco so that I would have snacks (hints, not foreshadowing)

This afternoon, we were visited by the ladies who lunch – 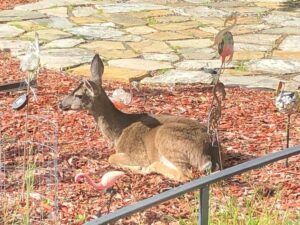 with up to four of them at one point hanging out on our front patio.

I managed about 250 stitches into the Spangler Book storykeep 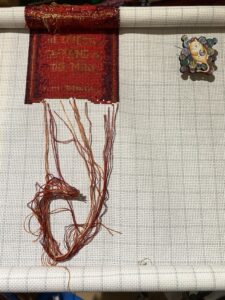 which puts it a bit over 1/3 complete. The fun thing is about another 10 rows and I will finally get a new set of colors as the dragooning starts to show.

And I finished the March Quaker by Heart in Hand – which means one less project to take along. 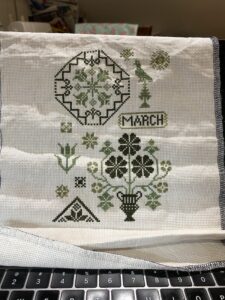 I’ve April & May packed to go with. I should be able get April started and finished before the end of the month.

Tomorrow? My flight leaves at 0640 which means George is going to have to drop me off at the Oakland Airport since BART doesn’t start till 0500. I am just not willing to risk running for the plane (15 minutes Richmond to North Berkeley, 35 minutes NB to the Coliseum Station, ~ 15 minutes between monorail rides from BART to the airport. Then security…. Did I mention that I would prefer to check my suitcase rather than deal with the overhead bins?

It is not quite 2200 here. Suitcase is ready to go. Backpack is waiting for the electronics. I probably should set an alarm….