By now you should have figured out that I adore wooden puzzles. Not the kind with large pieces intended to be bashed and smashed by the under 3 crew, but those colorful ones characterized by whimsy pieces and interesting designs.

The three manufactures that I have tested so far include Liberty Puzzles, Artifact Puzzles, and Wentworth Puzzles. Liberty is based in Boulder, Colorado ; Artifact in Menlo Park (California) and Wentworth in the UK (Wiltshire). Obviously, in this case it is cheaper to buy US due to the shipping costs. I also noticed it is also cheaper to buy directly from the company (rather than Amazon which increases the base price – which is higher than paying for shipping).

Artifact has launched their Ecru Puzzle line characterized by mat finish and absent any picture on the box (hello? Mystery puzzle. So obviously I had to try one. 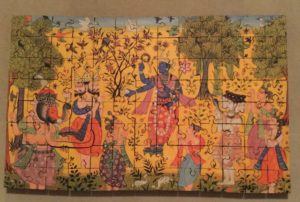 There were a few oddly shaped pieces, but over all, the rest were simply the wooden equivalent of your standard four sized puzzle pieces. The mat finish was nice as it cut down the light reflection, always an issue with a lamp for additional lighting.  Probably won’t be buying any more, at least not the mystery ones. There are a couple that I just might…..