I have no idea why I was insane enough to book an 0700 flight from Wellington to Brisbane.

Well, actually I do. It was something about arriving mid-day in order to stay out of the worst of the traffic. We will completely leave out the small detail of my not paying attention to the names of the airports and booking myself into Brisbane rather than Gold Coast. The second obviously being the one that I should have booked. In either case, a small plane to Auckland was in order. All of which meant leaving the hotel at something obscene like 0400 in the morning.  Made only slightly better by sharing a cab with two others from our group who were also outbound at approximately the right time.

Should I tell you about changing terminals in Auckland? I arrived at the Domestic Terminal. There wasn’t any signage pointing toward the International Terminal. I gave up looking and headed toward baggage claim which actually worked as there was a sign directing me outside the building.

Green Line – ok – I can follow a Green Line. Out, across the street. Along the side of the car park. Across two roads. Around another car park or three complete with a sudden sharp right where the line went into an area which was now fenced off. It was at this point that I finally saw a sign on the end of what looked to be a very ordinary building…..International Terminal. Yes! The two buildings are a brisk walk apart. Perhaps 10 minutes as apposed to the shuttle which runs every fifteen minutes.

And me with only 35 minutes before boarding what turned out to be a lovely 777. 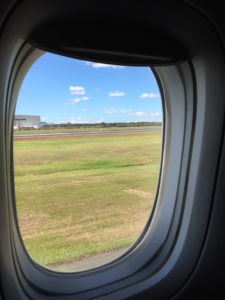 but the portholes are the same

Premium economy turned out to be what I would normally think of as business class for most long haul flights including my very own bottle of water, LED screen, angled seat and choice of food stuffs. 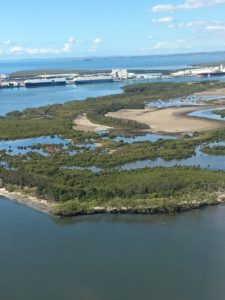 flying in. Lots of water and beaches down there

Brisbane was easier – I collected my luggage, walked to the train connection, bought my ticket and hopped aboard. The only thing I guess which I failed to understand was that “Quiet Compartment” doesn’t exclude people talking on their cell phones or children running around and screaming. Since I didn’t see a conductor, I suppose that lack of enforcement might have something to do with it.

Jill picked me up and I was off to Arundel. Which is not Rivendell but quite nice all the same.