There weren’t any ships in the harbor, the first time I arrived in Dubrovnik. In fact I wouldn’t have an an opportunity to see the city of stones gleaming on a sunny day at all if it hadn’t been for one of the  Norwegian soldiers being a a bit stupid on R&R. His was admitted to a Croatian Hospital with some superficial wounds and a broken bone or two. So I saw Dubrovnik from the air taking pictures from my seat in the MEDEVAC helicopter before we crested a hill to land on a soccer field where the ambulance was waiting for us. That was in 1998.

The city had been hard hit in 1991-2 with the break up of Yugoslavia. 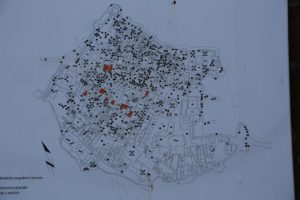 the dots all represent war damage

in the old city. The next opportunity I had to spend time on the ground was in 2010 when George and I cruised from Athens to Venice on the Wind Spirit. That time we dropped anchor in the inner harbor as pictured below. 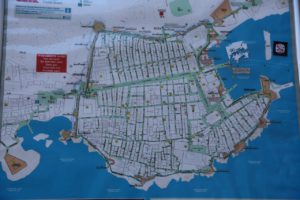 Since then, I have been back a couple of times on Royal which is normally docked to the west of the old city. 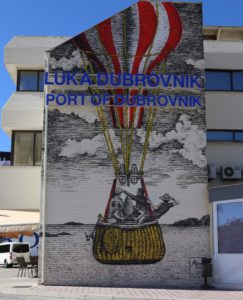 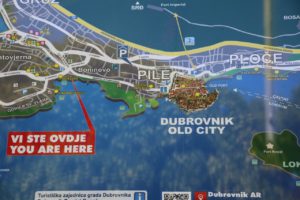 The Wiki article is pretty good, with one exception. There is only a minor mention of popular culture: Dubrovnik features prominently as King’s Landing and Qarth in Game of Thrones and also provides one of the locations for Star Wars – Episode VIII. As you can guess, there is a plethora of memorabilia to be purchased and Game of Thrones walking tours to be taken.

Me? I just walked into town, around a bit and back to the ship totally ~ 15k steps for the day.