We are getting close enough to Seattle that it is affecting everyone’s behavior. This is Day 23/24 of the cruise with docking taking place on the 16th. Which also puts this at 87/90 days since I left home. Give or take a couple since I have no idea whether or not I tossed in the second May 2 from crossing the Dateline.

The Fitness Center was almost empty when I hit the treadmill at 0600 this morning and barely a third full when I left an hour later. Compared to standing room only and lines for machines those first few days of the cruise. I can only speculate but figure that my first thought: all those good intentions by people who never, ever exercise at home have fallen by the wayside as waist sizes have increased. The other options – different times of day, people packing, confused from time changes just don’t seem as likely to me. I was still pleased to be able to log my 10000 steps prior to 0700 and see that my flicking Surge is finally on the correct hour. Mentally correcting one’s watch by 1-3 hours gets old after a while. 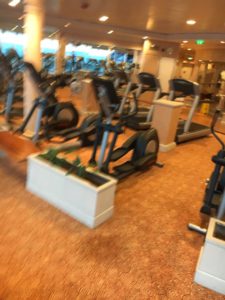 not only was the place empty, but taking a photo while on a treadmill is not exactly easy

The other bit of fun I had was to run the GPS tracker while I was on the treadmill. The Wifi wasn’t impossibly slow this morning, and the ship moves a bit faster than I. So should we believe that I covered the 7km that the treadmill says, the 16km that my Surge says or perhaps I can take credit for both and consider myself 23 km further down the line than when I started?

Nah, that would be like claiming goodness for having packed up a bag yesterday simply to get it out of the way. It wasn’t like anything was going to change about snorkel gear, RCCL Towels or gifts between now and departure and it was easiest to get it out of the way. I still have to pack clothes and decide which, if any, aren’t coming home with me. And paperbacks to the library, always a good idea.

The rest of the day was easy and pleasant. I joined the stitchers in the Viking Crown Lounge/Dizzies followed by heading to the conference room in search of the informal Veteran’s chat. I would have “murdered a curry” but alas today didn’t have the better selections so I settled instead for a second round of cheese-cake lollies before heading back to reading. I’m re-reading a few series (Briggs, Quick, Castle, Ward, Roberts) in anticipation of new books due out in the next couple of months. Plus, started the St Cyr series by C S Harris since most of the books are available between the Chicago and Berkeley Public Libraries. Not usually a fan of historical mysteries, these are actually both interesting and reasonably accurate enough not to irritate me.