It was a reasonable morning @ 0800. Even discounting the announcement that we couldn’t take the shuttle to the convention center like we had yesterday. Apparently we weren’t special enough, not being relocated at the last minute from the Phillips Hotel. Never mind the drive who was enforcing his list wound up with no passengers. The rules must be followed.

The tram is new, free, clean and lovely even if this area of Kansas City is not exactly thrilling or appearing to be thriving (parking for $5/day?).  I didn’t give the weather or outside temperature a thought since I was occupied inside the convention center for the day.

Observed around the Con

Finally finishing up ~2100, I forgo the Masquerade in favor of getting some sleep. Ditto for the parties. It was about this time when I became aware that the outside rumbling was not trucks driving under the building but thunder relating to the ongoing storm.

Hello? California resident here – specifically East Bay. We get fog or low lying clouds in the summer with an occasional covering of morning dew. We don’t get rain. In fact this past winter (note, north of the Equator August is most definitely not winter…) was the first in four years to get rain, ending the long standing drought. So color me not prepared for a good, rousing Mid-West thunder storm complete with this wet liquid stuff descending from the sky.

Contrary to public opinion, I’m not a witch and don’t melt with water. I was by far more concerned about keeping my camera and books dry. I dashed the three blocks to the tram and boarded the one that was about to leave, staying on to Union Station. 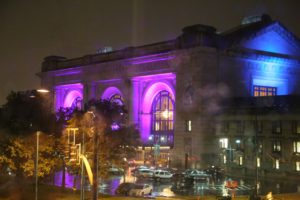 Cool what ? (taken from dry inside)

There is an overhead walkway enclosed system (Skyways or +11s as is know by some) which connects Union Station with the hotel complex. 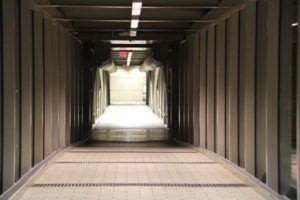 and leads to an 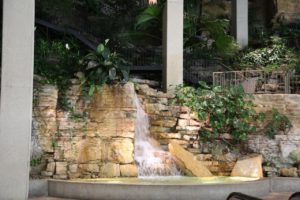