We sailed out of Seattle early last evening to lightly clouded skies and smooth seas. This time the Olympic National Park was on the Port Side and Vancouver Island on the Starboard.

But mostly it was a lovely sunset 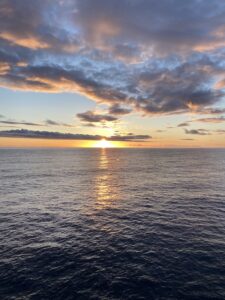 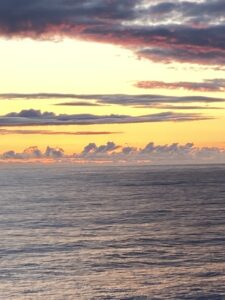 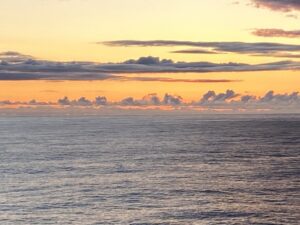 Our first of three Alaskan ports will be on Wednesday. As it is the furthest point on the cruise, we are headed there first and then will work our way back along the coast. The distances are not all that far so it is sailing up the Inside Passage, staying in the middle of the challenge – and just far enough from the shore that there is no cell coverage.

I relaxed in the library for most of today and stitched while ignoring all the regular announcements over the tannoy which were mostly by the Cruise Director’s staff attempting to get passengers to attend various events around the ship. As you probably guessed, most of those events, other than Trivia are all revenue generating.

Had a lovey chat at supper with the lovely, young HR director who is from Zimbabwe. She talked about the challenges of handling crew both while underway and while in dry dock (both the Jewel and a previous ship). She has been thinking about writing an article for the NCL internal newsletter. Obviously, I encouraged her with the thoughts that others could benefit and, as long as she phrased it in terms of what went right, what additional information would have been good to know ahead of time, and what she learned, others might really appreciate it. None of the other current HR managers on ship have handled more than one dry dock. With the young crews out there, it is rare for anyone headed Into the experience to have survived those 30-180 days before. Bragging doesn’t work, but humbleness and sense of humor does, I shared my experience as a passenger from Rotterdam immediately post the Chaos of the Seas dry dock in the Netherlands as an example of not well handled. She is also the lucky person who arranges for the all crew activities off ship in port. She is building up her database for the summer as the Jewel sails up to Alaska and back.

Otherwise, today’s project was “Death before Decaf” by the WitchyStitcher on 16ct whatever from Forbidden Fiber Co. This is a 4200+ stitch pattern (a lot more dense than the last) but I am making progress…. Also a new start on this cruise. 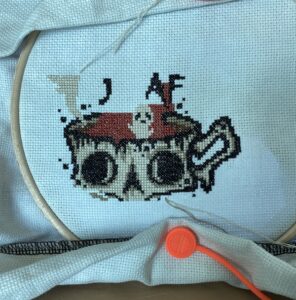