When I moved out at the advanced age of 17 to go to University communications were simple. You wrote and put your missive in the mail or, alternatively, you arranged a standing short phone call. This was in the days of Ma Bell and significant charges for toll and long distance calls. If you happened to be calling to a location where they were on a party line – all the more reason to keep your communications short.

Besides, part of becoming independent and figuring out who you were and what you wanted to become was distancing yourself from your previous location/personal ties.

Not so today as evidenced by how closely most of us have become electronically tied to people and places at a distance. Or how having a phone with you is taken for granted in most of the Old & New World.

This is not a random discussion – rather it is background to what happens when the party of the first part (DH aka George) finds he doesn’t have his phone when already having boarded BART. The party of the second part (yours truly) is headed to the VA for testing and needs to be able to meet up at the end of the day as the first person above has the car keys in his pocket.

And then chaos ensues. I easily make the Bauer shuttle to the VA. I check in early because I am there. My favorite nurse is on duty and connects a power injector to my port. I traipse down to Nuc Med about 2 1/2 hours prior to my appointment. They have comfortable chairs; I sit and knit. Their in-service ends early so the tech comes to get me.  What is my blood sugar? I don’t have a clue. Didn’t they test you? No, why? Well didn’t you give them the slip? What slip?

Turns out that the RN is on duty M,T,Th in Nuc Med. The other days they don’t have a nurse. No nurse, no onsite finger sticks or med pushes or port flushes or…. You get the idea. I go back upstairs. The Infusion Center nurses borrow the glucometer from the Ward and test me. No, I most assuredly do not have an elevated blood sugar. (trust me 76 is not elevated but explains why I was cranky). I go back down. Get injected. Hang out. Get scanned. Am excused.

Along the way I have an interesting discussion about the diet. It is set up to insure that no one winds up being turned down. There are diabetics, pre-diabetics and those who don’t know they have a problem.  Meanwhile – I could have had breakfast (or normal food for the last several days) since my blood sugar is totally normal by 90 minutes after eating. The no coffee? Too many people just add sugar and cream without thinking about it…..

Anyway – there I was, done by 1400 and no way to reach George. Except my email – which I did to tell him that I was done early. I spent the next hour talking to an extremely interesting fellow patient who has been a customer for over 10 years now. For the rest of his time – he does advocacy and housing organizing for the county in which he lives (being one of those who is about 6 hours out).

Since I have a lot of time – I take the shuttle to the Embarcadero and wander around. There is coffee, there are pastries. I am in a better mood. Txt from George – he can be done early. Ok – I tell him I am at the Embarcadero and head on foot to our meeting place @ Powell BART station. He takes my information as a directive to come to me (he is at Powell). Meanwhile, I have hiked to Powell. At this point, I lose it and email him that I will meet him at North Berkeley (aka the car).*

Obviously, I am in a horrible mood by this point. None of it could be my fault, now could it? I simply tried to provide him status updates. I did NOT tell him to change his schedule.  Meanwhile, he is worried because I am out early and assumes that I need to get home. He is trying to save me time and travel. And if we had not had the modern electronic conveniences, we would have simply met in the designated place at the proper time.

Sticking a needle in Aida cloth is really good for getting rid of irritation. 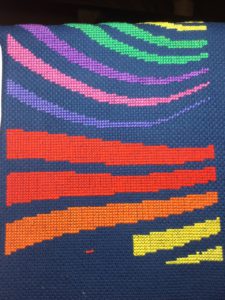 He still loves me, which is really cool.

Since cross stitch isn’t that portable, I started another hat.

joining the two sides of the band

* He has email in coffee shops and some of the meeting rooms which is how we managed to foul this whole thing up.