It may be late in the evening – but it is DONE! 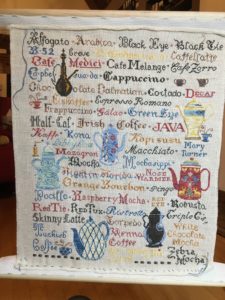 The pattern is courtesy of Tempting Tangles, originally issued in 16 parts as a stitch-a-long back in about 2011. It is more or less stitched as the pattern suggests, except for me inserting the creamer and sugar bowl instead of one phrase – “Chai Latte” which doesn’t have to do with coffee. Deborah, the wonderful designer, came up with a couple of other graphed alternatives. But the problem is that anything else would be out of alphabetical order. So, I faked out the creamer and sugar bowl – and “borrowed” the graphic on it from the Tea Sampler she has…