I’m sitting here listening to my husband give an account of the day emphasizing a nice hike into Berkeley that included a stroll through the campus, a visit to a bookstore and a nice mid-afternoon snack at Saul’s.

This was after a good hour of toting boxes and reorganizing in the garage. Amazing what one can find if enough boxes are moved: sewing machines, old laptops, cross stitch materials that perhaps moved to Germany in 1995 but most certainly relocated themselves to Heidelberg in 2001.

Where was I? Oh yes, George’s description of our afternoon’s excursion. What he skipped was the basic plan: there were a couple of exhibits on campus that he wanted to see. According to the schedule that he read – they were running over this time frame. There weren’t any hours listed, but that never stops him. What he missed was the following logic: this is school break, it is a holiday, the library is not going to be open on 1 Jan. Why in the world would they pay holiday wages to open the library on a day that few, if any patrons are going to drop in.

I did mention that the exhibits were in two different of the libraries?

My logic says – there should have been small print stating exhibit hours were during library hours. But how well can any of us read on a cell phone screen anyway. Looking on the internet is always the fall back after you have tried all the doors which are locked and there is a significant absence of people and lights gracing the interior.

Games of Berkeley was open and packed with people. I resisted buying any jigsaw puzzles. I didn’t fall in love with any of the five choices of Wentworth Puzzles. One of the regular puzzles featured balls upon balls of yarn. But I don’t need a jigsaw puzzle for that view, all I have to do is go open one of more than a couple dozen containers in the garage….

Then we started to look for lunch. I had my mind set on soup. No Asian, no Indian, no curry. Guess what? Almost 80% of the dining locations in downtown Berkeley were either completely closed or were past the lunch hour. The remaining ones? Burgers, Asian, Indian…. The fourth time George suggested Indian or Thai and he could hear again after my screaming at him (What part of [(*&)(*&)(*)] are you not understanding? Get a grip – what I am hearing is that you are blowing off what I have said is my preference and I am not going to change…… etc etc. 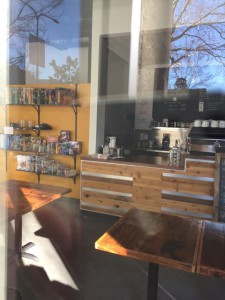 Peeking in the window – lots of tables, coffee and the side wall shelves stacked with games

The end result is that we ate at Saul’s which is just down the hill from where we lives. Since our first stop in that small center was the local bookstore it meant that we arrived at the tail end of the lunch time rush and only had to wait ~ 20 min. Soup? No Borscht, only various chickens with/without matzoh balls. I conceded defeat and had the Falafel Plate which was excellent, George had the Jordan River Plate – even more so.

Surviving the hike up the hill, I found homes for 3+ hats with the NYC daughter, received a selfie with one of the other hats which found a home with the Eldest yesterday 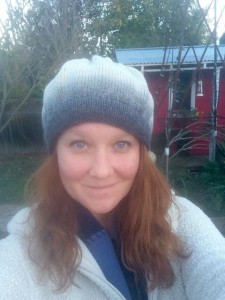 her backyard before hiking Wildcat Canyon

My surge says today was good for 13,654 steps, 63 flights of stairs (not counting the trip down to the hot tub) and I am off to weave in ends on hats so they can go in the mail in the morning…

fiber person - knitter, spinner, weaver who spent 33 years being a military officer to fund the above. And home. And family. Sewing and quilting projects are also in the stash. After living again in Heidelberg after retiring (finally) from the U.S. Army May 2011, we moved to the US ~ Dec 2015. Something about being over 65 and access to health care. It also might have had to do with finding a buyer for our house. Allegedly this will provide me a home base in the same country as our four adult children, all of whom I adore, so that I can drive them totally insane. Considerations of time to knit down the stash…(right, and if you believe that…) and spin and .... There is now actually enough time to do a bit of consulting, editing. Even more amazing - we have only one household again. As long as everyone understands that I still, 40 years into our marriage, don't do kitchens or bathrooms. For that matter, not being a golden retriever, I don't do slippers or newspapers either. I don’t miss either the military or full-time clinical practice. Limiting my public health/travel med/consulting and lecturing to “when I feel like it” has let me happily spend my pension cruising, stash enhancing (oops), arguing with the DH about where we are going to travel next and book buying. Life is good!
View all posts by Holly →
This entry was posted in Home, Knitting. Bookmark the permalink.