Don’t watch. Seriously, you don’t want to see this.

Cal was at Stanford today for the second of their two games. The first, Thursday, was at Haas Pavilion with Cal pulling out a win on Asha Thomas’ buzzer beating last basket. Today the favor was returned in spades. No clue what was going on, but baskets were missed, passes easily intercepted, literally a dozen opportunities lost. Stanford had its act together. It wasn’t pretty.

Then there was the heartbreaker of the Blackhawks beating the Wild 4-3 in overtime (Hockey, for those who don’t recognize the teams).

Otherwise, I spent a small amount of time on homework, but mostly worked on various embroidery projects. All told, six items completed. The cutest – 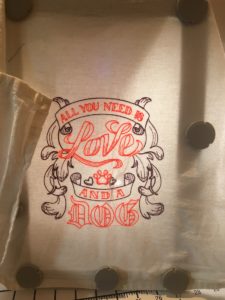 were a pair of flour sack towels. The purple is called Orchid – that orange? Allegedly it is Devil Red.