This is a 7000 series train. Followed by where it is going and the next station. Of course, not all seven thousand series trains are created equal on the Washington DC regional Metro. Some have internal electronic signage. Some don’t. The trains are all shiny silver without any of the advertising wraps that are now becoming much more common on the BART system. The insides – 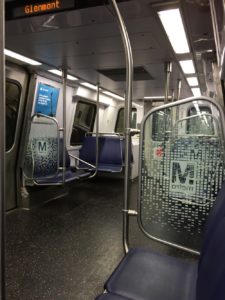 shiny inside as well

some of interior design is the same as BART. But there is a noticeable difference; both are there sidewalls which create compartments, but also blocks free movement of passengers. I also noted the complete lack of space for bicycles. Apparently, no one in the DC Metro area uses a bike for commuting. 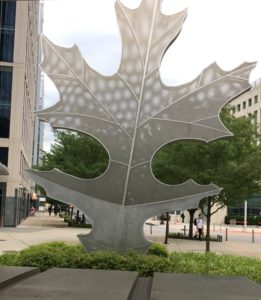 outside the NOMA-GALLAUDET U METRO STATION

where my hotel is located. There are various bits and pieces of that particular leaf (Oak?) around the station.

That was just the getting to and from the conference portion of my day. Otherwise, I went to a number of excellent presentations and a couple in which I was all too easily distracted. On me, maybe. Our military related symposium went extremely well as did our working group meeting. Surprisingly, the Canadian contingent outnumbered the US. Otherwise, we had representatives from Austria, Australia, India, Taiwan, UK,  France, and a few who never said anything,.

I had a chance to FaceTime with George who is getting extremely bored (watching the eucalyptus sway and paint dry). Otherwise, there is news on the TV which is not necessarily thrilling. And of course, there is baseball and on some nights, basketball. (The As almost managed to toss away their win against the Rangers.)