They are noisy, they are ugly, they fly in your face. They are everywhere. (Wiki Article). It is Anywimpossible to avoid articles in the US news. Cheap reporting as I am told as there are science types, amateurs, and everyone and their dog on the street who are willing to pontificate this particular episode (every 17 years? I was outside the US and spared the last experience).

When I think back, I am sure that there was at least one episode in childhood where they magically appeared, were stomped on and tracked into the house. But, as overall memories of that last period in time – not particularly outstanding. I am sure that the birds enjoyed the feast.

Anyway – when most of us think about a retreat, we think of woods. Quiet peaceful surroundings where you can relax and contemplate whatever. Please, wipe that completely out of your imagination. Instead – substitute a couple hundred cross-stitchers (mostly women) sitting in groups of five around tables; stitching and chatting. Frankly, I think the noise level exceeded the cicadas….

But it most certainly is a nice time. I am having a chance to meet various people with whom I have corresponded over the last year as well as being able to wander around and see every one’s stitching. I will spare you my rant about those who stitch reproduction samplers. (ok, just a small bit of rant – samplers were stitched by young women as their only chance to learn both stitching and a minimum of literacy – thus enabling them to stitch what were effectively laundry markings into clothing and linens…. Why on earth would I want to stitch – an alphabet, an ugly house, a tree, and maybe a flower port? Really. They all look alike because they are) [Off soap box]

I am headed to sleep before 2200 – needing to catch up from the train trip (and time zone change. Three hours isn’t that much, except that it is….)

For those of you who might be interested – this is the current status of COVID in the eastern portion of the US. It is why, inspite of the fact that just about everyone attending is immunized, mask wearing makes sense. (see the red marks in Ohio?) 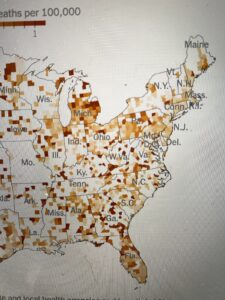 And, since it is “so far” between my hotel and the Convention Center – transportation is being provided. This horrible distance is about a mile. Yep. (not even 2km in real money). But then I am relatively fit compared to a lot of the other people attending. Enough said on that. 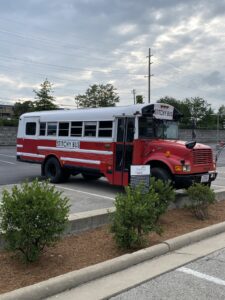