Without anything specific planned today, it seemed important to make sure that I got to the fitness center, boring as that might be. Of course, there was the idea that a stroll along the shore might also be a good idea.

I have my choice of currency

So I did both: checked the block about burning off some calories first thing in the morning and then taking off. There had been a lot of warnings about staying out of the unsafe areas which seem to comprise a goodly portion of both Suva and the island. As it was a Saturday, there were people everywhere. Couples, vendors, little kids having a great time. Shops were still open and I decided that Maus was going to have to survive without a postcard from here as I just couldn’t brave the crush in the area around the port. 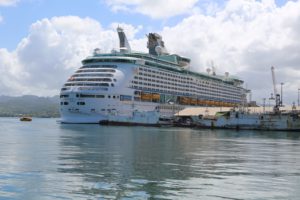 Heading along the seawall to the right, there weren’t as many people and I was enjoying my nice brisk walk past hotels, stores, open spaces and the occasional home. Then I heard a brass band playing. Holiday? Parade? Concert? And started to follow my ears leading me from the ocean side toward what appeared to be a main street.  There weren’t any crowds, but the music seemed to be moving in space and martial in content.

Reaching the main street – there was what was obviously a military marching band coming toward me. Ok – and I fell in with a few young boys, locals, and several tourists tagging along to see where they were going. The end point, as it turned out was the Governor’s/Counsel General’s/President’s/Whomever’s front gate where two guards dressed in the same blue and white as the band were standing guard.  The platoon following the band was outfitted in Red and White.

Being retired military, I am still a sucker for a well run military ceremony and this was. Over the next several minutes first the band played followed by a version of pass in review, and the ceremonial handing over of the duties complete with all the standard changes of rifle positioning.

Did I mention the loudly barked orders? The Sergeant conducting a visual inspection of each of the guards?  How about the stomping of feet into position? Or the fact that all are wearing sandals?

[click on anything you want to see in larger size]

the band turning into the gate

The start of the change over