Again today is mostly pictures. The hotel in which we are staying is fabulous (Sarovar) and obviously not budget. Having a good time combining Indian and Western foods at breakfast. All the food stuffs are fresh.

Back to the Travelogue …

the red bricks are only a layer thick 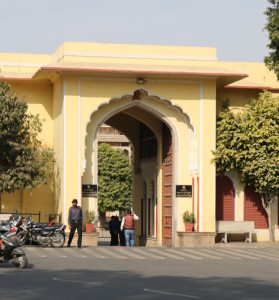 Up front, the science of astronomy is fascinating, the social sciences regarding behavior and investment in astrology is equally so. But thinking that the stars, planets combined with my time of birth, not so much. But to know that this is a calendar system with only 30 day months with the extra month tossed in when needed is interesting. So is the fact that, unlike having duplicates of the same month over and over again – the duplicate month also processes through the calendar.

Personally I like the Julian Calendar – it makes knowing where you are in the year and calculating other events from that point extremely interesting. It does feature a serious lack of interesting mythology and hard to pronounce names but you can’t have everything…

What follows are photos of the various instruments that are used to calculate date, time and involvement of the constellations and planets. Built, as I remember in the 1700s – these simple structures are amazingly accurate on time, date, and location of planetary bodies. What it reminds me most of is all the math used to calculate and triangulate the location of satellites which figuring the clock offset in GPS navigation. Just with wire, cement and the occasional large iron structure instead of waves.

variou structures which measure what is ascending, descending and influencing. There is a separate structure for each sign of the zodiac – libra is demonstrated at the end. I hope I have all paired up correctly

intended to correlate the current moment with your astrological sign

Then it was on to City Palace where the most interesting exhibit for me was the Textile area featuring various ceremonial robes naturally in an area where photography is forbidden. Same with the large reception hall and historical serious of procession, reception and coronation photos. Not enough to buy the book – too early in the trip for that. The second largest challenge was attempting to get photos of anything without herds of people taking selfies… Reminded me strongly of Petra and all the people who were more interested in documenting that they were there than looking at where they were.

and the doors of the four seasons in the inner courtyard. I would tell you which belonged to which season if I knew….

Lunch was at a pseudo-Italian restaurant. The food was meh. I skipped the optional activities rather than deal with another crowded market or a jewelry factory. Am sticking to the “postcards only” ban on adding anything to the suitcase.

And miscellaneous sights around the city

yes, it is a cobra