It is amazing what one can discover when excavating in the garage. Or rather, in the bins and boxes which formed the household goods shipment which left Heidelberg in Aug 2014 and arrived here in Sept. I haven’t really had an excuse for not looking before, and actually should have done so when I arrived. I knew I had cross-stitch supplies in there somewhere. Most of my various fiber bins didn’t go to the storage unit when we had the garage renovated since they were fairly safe inside Rubbermaid containers.

I even knew the size and shape of the particular clear plastic container which turned out to have an amazing array of linens just waiting to be stitched. It also had a Mrs Tiggywinkle cross stitch pattern book and several kits. 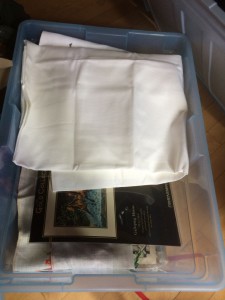 And, of course floss of which there are several brands, a rainbow of color and a challenge of storage options. 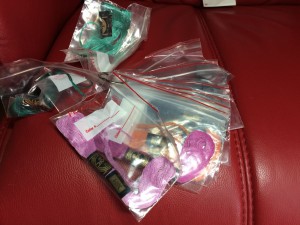 floss in bags on ring

which might work for a project in which you don’t want to cut anything ahead of time and have a limited number of colors involved.

That for a specific project. 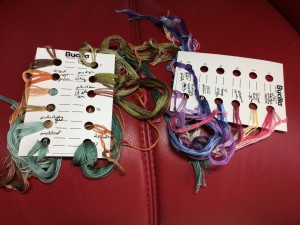 And then there is the reserve stock which seemed to contain a lot more colors than what I remember ever purchasing. Including those which I have picked up in the last week or so looking ahead to the project after the present. 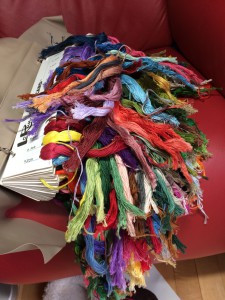 whole bunches in a binder 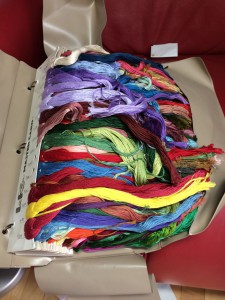 which, when full doesn’t close up all that well

and to take a break – 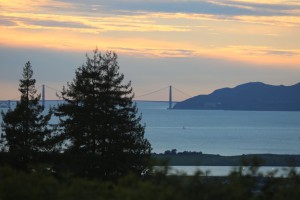 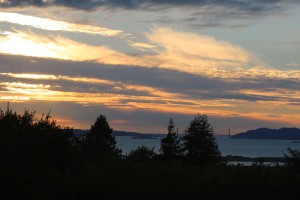 less than an hour to sunset 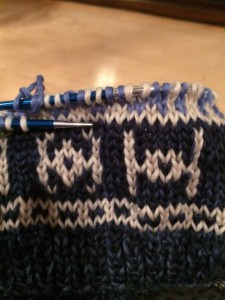 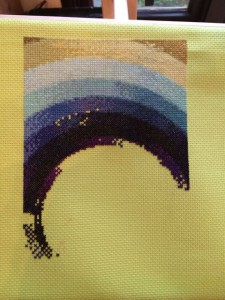 it was a week ago we made our move from Heidelberg to Berkeley.

The day had started all too early in the morning with our cab driver shaking his head over the mound of luggage. Not our issue since George had specifically told the Taxi dispatch that we had a significant number of cases. The day comprised hauling that luggage around, checking it, recovering it and ending with hauling those self same pieces of luggage up the stairs in Berkeley.

I am sure that I have whined more than once about living on hills, haven’t I?

Most of the week has been devoted to unpacking, attempting to organize and dealing with an unremitting series of migraines which I absolutely know are stress related. It also doesn’t help that I wound up out of my usual medications through miscalculations and not being smart enough to call the VA refill line early. That refill line is recorded 24/7. Refills are mailed. If I had had enough sense to call the day of arrival I never would have run out of anything but duh, I will live so hopefully have learned.

As a result of the headaches mentioned above, I am ignoring the usual 25 Dec festivities, i.e. movies and Chinese food &/or Indian in favor of some more sleep. I want to feel better tomorrow – I have a coupon for Joann’s and need few more colors of floss…..

According to the original schedule – today’s stop was to be in Athens and tomorrow here in Souda (listed as Chania on the itinerary with the usual disregard for the actual port). But since it seems that the 17th would not be a good day to be in Athens, the two ports and their days were flipped.

Since I was here just last month, I didn’t have a burning need to go off the ship vs resting up from the last two days of Kotor (climbing up to the fortress) and Corfu (hiking up to the lighthouse in their old fortress followed by walking around a goodly portion of the town on my way back to the ship). It seems that doing the equivalent of 125+ flights of stairs by a person who normally doesn’t have to deal with more than 3-7 flights per day results in extremely sore calf muscles.  Rather than risk converting pain into a posterior compartment syndrome which would badly trash the next few weeks of planned travel in addition to adding extremely ugly scars to the backs of my legs, I elected to cool my jets.

I can offer you only a departing picture – 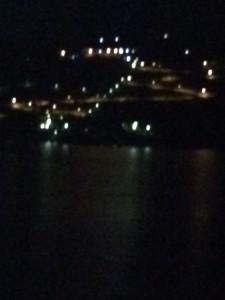 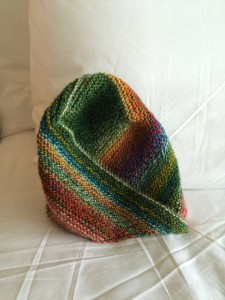 and no finishing which is the absolute best

as well as making progress on the cross-stitch 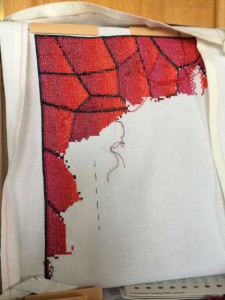 the start of the Fractal Star

which has a full 30 pages of pattern. What you see is the tops of pages 1&2 along with the edge of page seven (starts the second row)

There is such a thing called “Neue Deutsch”  Kind of like adding a german prefix to a word of another language and yanking it into German. In this case – adding the “ge” to cancelled.
The Lufthansa cabin attendants are having a strike. Unfortunately for me, it involved any flights going in or out of Frankfurt on Monday. Since my flight would land that morning – it was cancelled.  Of course, they did send me an email about 0830 this morning which was buried in over a thousand incoming emails when my phone picked up the AT&T network as the ship docked. Clearing out most of the messages about 0600, I didn’t go back through all of my email boxes in an effort to not run down my battery or George’s data allotment for the month.
Didn’t even see it when hanging out in the Military Lounge. Imagine my surprise to the crowd lined up at the Lufthansa counter when I arrived at check-in. Since I hadn’t seen the earlier email, naturally I was beaten out for all the easy alternatives by those astute passengers (or those who haven’t been completely off the net for the last 10 days). The only possible alternative was a late flight on BA through London with a long change at Heathrow resulting in me not getting home till about 2200. This is Sunday. Not a good day for late trains.
I opted for the hotel & meal voucher.  The contract in Miami is with Marriott. Ok. I can deal with that. Especially with free and pretty much unrestricted access to WiFi.  There just also happens to be a strip mall accessible by bus and taxi which  features both a Michaels and a Joanns. Helped by the offer of 3/$.99 on DMC floss I set out managing to score all my missing floss and a couple of storage options!
Supper and an early bed time rounded out my day.
Tomorrow’s strike involves Frankfurt Airport. Since my rebooked flight isn’t wheels up or down their on Monday – I am hoping things run smoothly since right now I can’t find any information on the UFOs Tuesday plans. (BTW – don’t you just love the abbreviation?)

The concept is easy, once you have the idea. It is that original idea that is so interesting. This hat can be knit in any weight yarn for any size head.

You start with knitting a triangle – 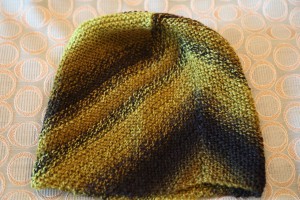 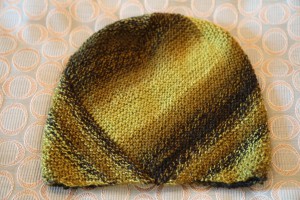 the side where the triangle is joined 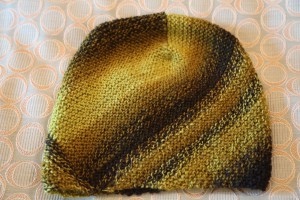 looking where it starts to wrap

which leaves you at the end with a small area of three needle bind off and a top that looks a bit like the Hitchhat. 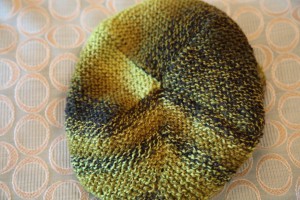 down from the top

As per usual, this is one of the many, many balls I have of Crazy Zauberball in an extremely ugly color combination knit on 2.5 mm needles. I forget how many stitches were on the needle at join point, but will try to remember to write that down the next time. 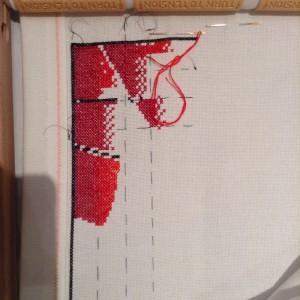 a few days into Chart 1

Would you believe there is only one store between Darmstadt and Stuttgart that actually carries cross-stitch fabric? Not the little re-packed squares in bags, but bolts of different fabrics, counts and colors by the meter?

Tucked on what is probably a side street in Handschuhsheim across the river from Heidelberg is a small yarn and needlework shop. It is wonderful! The lovely woman had fabric, threads (ok, Anchor not DMC) and I was a happy camper.

This made up for the fact that I have to get a biometric photo in order to get my driver’s license replaced. So it was back to home, redid some packing and avoided doing all the computer tasks still on my list.