We sailed in early this morning. Our original arrival was scheduled for 0800 and departure at 1400. Yesterday we were informed that we would be arriving ~ 0600 instead. I can live with early, early is more than welcome in hot and steamy locations.

So imagine my surprise looking out my cabin [large lovely] porthole around 0400 to see the lights of downtown Cartegena reflected back at me. Early? I’ll Say. By 0500 in the morning we were along the pier. Of course no one is up this early to clear the ship so I think it will still be whatever when we can get off.

I found that there are a few others up early. I met a lovely woman sitting out on Deck 11 named Joan with whom I chatted a while. Then a German gentleman in the Observation Lounge and finally a couple of Aussie women who were up to see the sail in along with me forward on Deck 12. It started feeling like my Grandeur cruise from Nov 2011 when I was up early and meeting people rather than staying holed up in my cabin or happy stitching corner.

Once again, nothing doing on the tours. I’ve been to the old city and enjoyed it but don’t have an interest in going back. The ship’s Hop On-Hop Off was more than I wanted to pay. And besides, there are birds to photo, monkeys to capture in pixels and maybe a pair of earrings to purchase….

So, it seemed like the thing to do was sit outside the Juan Valdez Cafe and watch the birds. Besides – it seems to be threatening rain today……. 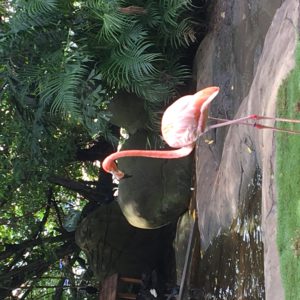