There is a long and involved history of Oman and its tribes. Stories involving wars and the slave trade; water and oil. Building, destroying and now the presence of guest workers rapidly building roads seemingly to nowhere. A country which was not interested in tourism prior to 1992. A country steeped in traditional dress and traditions.

A country where there are a lot of camels. Camels which seemed to be more interesting to the rest of the passengers on my small tour bus than anything of landscape, history or narrative. As all compelling as elephants seem to be in Africa even when you know how large, destructive and horribly smelling they are. Camels which seemed to hold interest even among people told repeatedly that cute was not the issue – biting and spitting was.

was our first stop – repaired castle/fort/residence of the 1800s

the rare bit of wood in this treeless land

and cooking/storage that hadn’t changed in centuries

from there it was on to
Sumhuram Archeological Park
and the center for Frankincense trading for the eight centuries encompassing three hundred years before the common era and five hundred more after . The sap being collected from trees sequestered far up in the Wadis and carefully hoarded, collected, traded and finally brought to this location. We were told that the permanent residents of the keep numbered only about 300, almost all devoted to the trade or security of the precious treasure of the incense.

The walls were (and are) built of stone, the openings small, the floors of sand. Inscriptions persist till the present day while the location is set on a protective bay; a hillside possible to defend.

I did mention camels – didn’t I? 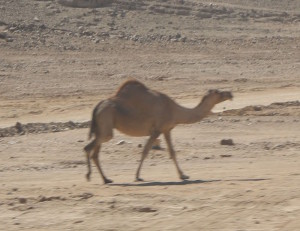 The stop at a small mosque/memorial reminded us all of the bare land. Of a nomadic people who buried their dead where they were and moved on. Culture and the facts of daily living meaning that a return ever to this grave was neither possible or necessary. Women were buried with three markers, men with two. The Suni tradition with hands held next to the face in prayer helping to identify the head of the grave.

oh, yes – and goats. Can’t forget the goats at home even in the middle of villages 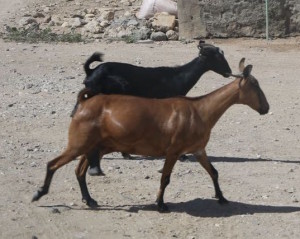 From there it was a quick look at caves the Beduins used seasonally as living quarters (the current presence of water is manmade) with some now made accessible for the tourists.

which made our first glimpse of the coast, water, gleaming sand that much more surprising in contrast. 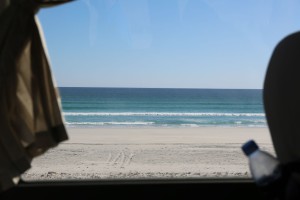 We saw formations left from their volcanic origins, areas where the sea would spray up through blow holes when the tide was in. Open faces of rock and areas thinly covered with sand and soil, sturdy and stubborn plants clinging precariously to the steep slopes.

A wadi high in the hills

and, of course, camels